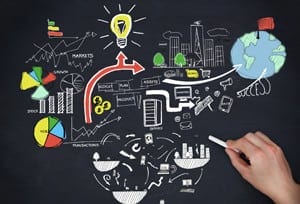 Think the road to a B2B sale is straight and narrow? Think again.

“If risk is involved, humans get emotional, and that’s where predictability goes off the rails,” said Penn. “Humans are driven by a mixture of risk and reward—reward drive us forward, and risk drive us back.”

Everyone has a different risk profile, he continued. Some people are go-getters who throw caution to the wind, while others are risk averse, and prone to hesitate.

“If you take a lot of different types and put them together in a group, the group dynamic skews to the risk averse side,” he noted. “The likelihood of a purchase getting completed drops significantly if there are more people involved.”

“Tracking the a team of B2B buyers is like following a game of three card monte,” he said, noting that because there is often six to 14 decision maker involved in a B2B decision, it can be hard to know where to look. “You need to speak to the language not of the individuals involved, but of the group involved.”

Artificial intelligence and machine learning can help B2B marketers do just that, he said.

“Think about how a child learns,” said Penn. “They explore, they develop. We have sensory pathways and develop learning—AI is nothing more than machines being able to perform tasks that normally require human intelligence.”

“Everything you do in life is an algorithm,” he noted. “If you take the same route to work every day, that’s a type of algorithm.”

Capital One Engages Developers With Personas

Tom Fishburne Toons Into the Funny Side of Marketing