Can a burger give you nightmares? Burger King says yes—particularly if it comes with a ghoulish green bun and fillings that would make anyone howl in the night. 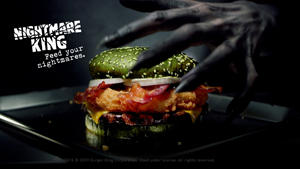 BK’s Nightmare King burger is its Halloween trick or treat for customers. But BK says this is no joke, claiming that through its partnership with Paramount Trials and Florida Sleep & Neuro Diagnostic Services and Goldforest Inc., a scientific study was conducted over 10 nights with 100 participants (or should we say victims?) who ate the Nightmare King before they went to bed.

“By tracking various signals from the sleeping subjects including their heart rate, brain activity and breath, a group of doctors and scientists identified whether the individuals had vivid dreams,” BK says. The King claims the data indicated that the incidence of nightmares increased by 3.5 times.

Sleep subjects reported people transforming into snakes and aliens attacking boats they were on.

To boost your incidence of nightmares, the Nightmare King will be available Oct. 22 as long as supplies last.

BK joins plenty of other brands staging Halloween campaigns, including Bacardi who put a twist on the ol’ standard cocktail recipe video with a splash of ghastly frights.

The video, “Barcardi: The Zombie” is Bacardi’s way of sharing some fun cocktail recipes for Halloween, while at the same time promoting two of its brands—Bacardi Superior and Bacardi Black, both ingredients in the cocktail. The film is reminiscent of old school horror flicks and draws inspiration from classics like The Shining, The Ring, Saw and Psycho.

“Halloween is the second biggest night out in U.S. after New Year’s Eve and we wanted to do something different just to have fun,” says Bacardi’s Director of Creative Excellence Laila Mignoni. Bacardi launched the campaign in September as a way to keep pace with consumers beginning searches for drinks and food items to celebrate Halloween.

As for that green burger? Fangs, but no fangs.