When Budweiser poured its summer “America” campaign over the country last year, it was fraught with controversy. 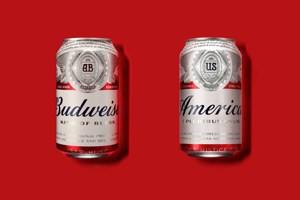 Bud changed its labels from “Budweiser” to “America” with a strategy to reach patriotic Millennials, an age group that typically prefers craft beers. And, critics complained that Bud’s decision to brand itself as “American” was actually un-American since the brand is owned by Belgium-based AB InBev and had trouble sustaining its initial consumer perception bump.

Bud is trying again this year, reprising the campaign with a new title—”America is in Your Hands”— with its 12-oz. cans and bottles. Some labels will also be modified to include words and phrases central to American history, including phrases from the Pledge of Allegiance and lyrics from “The Star Spangled Banner” and “America the Beautiful.”

The bottles, designed in partnership with Jones Knowles Ritchie New York, hit store shelves yesterday and will be available through the November election.

On shelves nationwide from May 23 through the election in November, the cans and campaign will also star in the brand’s new national TV spot, premiering June 1.

“America is in Your Hands” will execute this summer at a number of major events, including Fourth of July celebrations, the Copa America Centenario soccer tournament—held in the states for the first time—the 100th anniversary of the National Park Service. Events will be staged to celebrate the brand’s six Team Budweiser athletes competing to appear in the Rio 2016 Olympic and Paralympic Games. In addition, Bud will unveil cans and bottles with imagery featuring the Statue of Liberty’s torch and inspired by Team Budweiser and its Paralympic hopefuls.