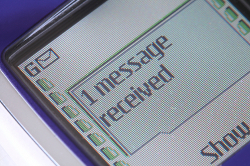 Two new mobile marketing developments—one from the Federal Communications Commission and one from the courts—have combined to impress on marketers the importance of getting formal permission to send text messages, in order to avoid the appearance of spam or unsolicited text messages.

Stories about text spam have featured in a number of headlines recently, and research indicates that spam text messages of all kinds grew 45% in 2011 to 4.5 billion messages globally. To put that in perspective, that’s not quite two days’ worth of text message traffic in the U.S. alone, at the current rates of about 2.5 billion messages sent per day. All told 2.3 trillion text messages went out worldwide in 2011.

Still, it’s an ongoing concern for carriers, who see text spam as eroding a popular and profitable service that they provide. And it’s a new worry for consumers who may have come to trust that, unlike email, SMS messages always come from people they know or from brands and content sources they’ve given permission to message them.

Wireless carriers, the FTC and the FCC have gone after some of the most blatant malefactors who use text spam either to phish for consumer financial data or simply to sell their own wares or those of third parties without permission. But mainstream marketers need to be aware that a number of class-action lawsuits have been filed in recent years against legitimate brands and agencies that allegedly overstepped the boundaries laid down by federal regulatory agencies about SMS marketing.

In recent years, Twentieth Century Fox, Simon & Shuster, Timberland and Burger King have all settled class action suits that alleged they sent text messages without receiving explicit permission to do so form the recipients. NASCAR is currently defending itself against a text spam class action. [[http://www.courthousenews.com/2011/08/11/Spam.pdf]]

The latest text spam class action to wind its way through federal court was filed last September against Jiffy Lube franchisee Heartland Automotive Services and TextMarks, an SMS marketing agency.  In the filing, a group of consumers alleged that the pair violated the Telephone Consumer protection Act by blasting text messages advertising a ‘one-time offer” of 45% off the price of an oil change to former customers, using the phone numbers they had entered on invoices they filled out as part of the previous sale.

Heartland’s lawyers sought to get the class action suit dismissed by the U.S. District Court for Southern California on a number of grounds. But Judge Jeffrey Miller dismissed this argument in a ruling in late March, allowing the lawsuit against Heartland to proceed. And marketers should carefully examine his opinions regarding the dismissal request to see how many might fit their situation, or that of their outside text campaign platform.

For one thing, heartland and Textmarks argued that the TCPA unconstitutionally restricts free speech by prohibiting the use of autodialers—machines that can generate and dial phone numbers, often either randomly or in sequence—to send text messages without permission. Many of today’s mobile phones and even computers have such autodialing capabilities, they maintained, and therefore private individuals could be prosecuted under the TCPA for sending an unsolicited message to a friend of a friend, for example.

Judge Miller disallowed that argument. he also rejected the notion that plaintiffs in the case needed to prove that the autodialer’s generator function had been used to send out the text messages en masse. Previous court rulings have held that simply using a dialer with the number-generating capacity is enough to violate the TCPA, whether or not it was used, and have set damages as high as $500 per message sent.

Heartland’s argument that it didn’t send the messages itself also failed to head off the suit. Allowing that argument to get the action dismissed would provide cover for every marketer to evade the TCPA regulations, Miller said. In other words, under what has been enforced in other text-spam suits as the “doctrine of vicarious liability”, outsourcing the actual execution of an SMS campaign provides no cover against charges of wrongful behavior.

The portion of Miller’s denial with the widest application for marketers may involve those customer invoices where Heartland and TextMarks mined the phone numbers they used in the SMs campaign. While the judge did not rule explicitly on the use of that invoice data, he did express skepticism that marketing to phone numbers that customers were asked to submit without notice that they might be used in marketing would fulfill the TCPA requirements for “strict consent”.

“It is certainly conceivable that even if the invoices are accurate, some or all of the plaintiffs were unaware that they had provided their telephone numbers to heartland in connection with an oil change they had received,” Miller wrote.

The suggestion conveyed is that even though text messaging involves a phone device, marketing via text is different from telemarketing. There the TCPA allows marketers to call customers who have made a transaction with their business in the last 18 months or who have made a business enquiry in the last 3 months. But for SMS marketing, a prior business relationship is not enough. Customers need to be asked in advance for their opt-in.

Nor is there a safe way to get customers or prospects onto an SMS list and then give them a clear way to opt out, a method employed by at least some email marketers. Text messages are considered phone traffic, and their handling is run under different rules than those governing the ISPs that connect most email traffic. Since texts can cost the recipient up to 20 cents each under certain low-priced message plans, allowing even a first unsolicited text could constitute forcing the recipient to buy something.

The notion of explicit consent has been a grey area for text messaging campaigns in the past. As Derek Johnson, head of the Tatango SMS agency, reports in a blog post, SMS messagers have used list-building tactics such as messaging to the cellphone numbers found on business cards in a fishbowl left by the register. In the Heartland example, four of the six plaintiffs in the class action suit had put their cell numbers on forms they were asked to fill out before getting oil changes.

But new amendments to the TCPA issued by the FCC last February seek to eliminate this vagueness and to make it clear that businesses have to obtain “prior express written consent” from anyone to whom they want to send a marketing text.

According to the new version of the statute, that written agreement has to include “a clear and conspicuous disclosure” that saying “yes” to something authorizes the business or service provider to send texts to the recipient’s mobile phone, including advertising texts, and that saying “no” won’t prevent the purchase of any of that business’s goods or services.

It also means getting and archiving a signature of the recipient’s agreement. That can include a signature in digital form, and a mobile opt-in would qualify as such. But it will also require that marketers or their SMS agencies keep a record of those opt-ins that can presumably be produced if needed as evidence.

Guidelines put forth by the Mobile Marketing Association already stipulate an active, explicit opt-in as a best practice for SMS campaigns, along with the ability to opt out in every message sent. But those association guidelines don’t carry the same enforceable weight as a statute such as the TCPA, under which suits can be brought against alleged violators.

Do these separate actions, by a Southern California District Court and by the FCC, make marketing via text messaging more challenging even for brands with good intentions? Tech lawyer Venkat Balasubramani thinks the potential gains may not be worth the risks of lawsuits and expensive settlements.

“The big takeaway from [Judge Miller’s order that the Heartland class action suit should continue] is that text messaging-based marketing is something that companies often screw up, and those screw-ups end up being costly,” he writes in a post to the Technology & Marketing Law Blog. “Given the draconian provisions of the TCPA (statutory damages, stringent consent provision, no free pass for the initial message, and liability for any unsolicited message that is sent with certain equipment), rulings like these make me think companies should consi9der avoiding text message-based marketing altogether.”

But mobile industry service providers disagree. Vibes Media, a mobile marketing and technology company, is one of a handful of providers of shortcodes that can be used to opt in to text messaging. Vibes chief innovation officer Alex Campbell says that while text spam is a problem for all parties, the carriers are acting to put solutions in place. Meanwhile the unique benefits of SMS as a marketing channel are not undercut by the risks, for brands and agencies that exercise a minimum amount of care over their opt-in procedures.

“When you get a text message, you open it right away, because text is legit,” he says. “We’ve worked closely with the carriers, and I know they are extremely focused on the problem of text spam. They’ve got very smart people coming up with solutions and have already gone very far in the spam-prevention direction.”

In fact, Campbell points out, carriers have come under criticism by marketers in the past for being too scrupulous and slow about auditing SMS campaigns both before and during their rollouts. But Campbell says he has no problem with carriers exercising that level of inspection over the SMS traffic crossing their networks, if it means a more secure environment for text messages than, say, exists now for email.

“These efforts create some problems with text that we have to deal with every day—the short codes, monitoring and all that—but in the end I’ll trade some flexibility for the safe environment of SMS, because it’s effective. A lot of the success of SMS is due to that extra care.”