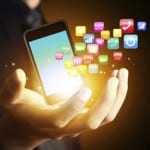 Only 16% of people will try an app more than twice before deleting it, according to Compuware. Unfortunately, many advertisers consider any app install to be a win, making no delineation between those who keep, use and spend on the app and those who quickly delete—and this is wrong.

I don’t understand why much of the advertising technology community wants advertisers to forget about the costly investments already made in their well-established enterprise CRM systems and customer lifetime value (LTV); they hold the keys to fixing this problem. When it comes to digital marketing and the pursuit of the almighty conversion, most platforms fail to identify consumers across devices, asking advertisers to trust single-channel algorithms. But in our increasingly mobile world, advertising suffers without the guidance of enterprise CRM and its ability to help advertisers understand and measure customer LTV.

The root of the issue

Consumers already spend more time on mobile than the desktop:

For most marketers promoting apps, whether those apps are for gaming/entertainment, retail/shopping, travel or any other myriad of goods or services, the end goal is more than an app install. Instead, these advertisers most often want to generate ongoing engagement, sales of real or virtual goods, or ongoing ad views, but the lion’s share of these meaningful interactions come from a tiny percentage of those who install an app. Recent estimates point to less than one percent of spenders generating more than half of all revenue generated through apps.

The arbitrage model requires advertisers to abandon their own insights on their own customers and consumers like them. Instead, they must trust the provider to match desired consumers to ad inventory. The inventory often performs poorly compared to buys informed by CRM, and advertisers often pay steep vendor margins for the analysis and placements.

In the spray and pray model, advertisers target people based on geography and demographics much like an old-school print or TV buy. They do not use precise customer IDs or pinpoint audiences and have no ability to re-engage valuable customers or connect with new customers who strongly resemble their best ones.

Mobile advertising works well when you integrate CRM and LTV, but even the best campaigns and ad inventory underperform when advertisers fail to connect their campaigns and optimize according to customer ROI and LTV.

We can do better

Premium inventory comes from some of the best known mobile publishers out there with advanced tools that connect to robust user bases. Facebook, Google, Twitter, Yahoo! and major display networks offering native ad formats all qualify as premium inventory, and advertisers who use the guidance of CRM and LTV to buy and optimize premium mobile inventory consistently outperform those who do not.

With customer LTV as the guide, advertisers can employ efforts to re-engage customers. Through insight-based targeting, they can also pursue others who closely resemble their best customers. To make good use of a CRM system, advertisers should harvest at least four types of insights when profiling their best customers in order to pursue others who resemble them.

Since app installs or conversion rates don’t reflect progress against the true end goal, advertisers increasingly look to new metrics developed specifically to measure success in the mobile app world. Each requires integration of CRM or some form of LTV insights, and advertisers must isolate the in-app actions most valuable to their businesses and arrange measurement to gauge progress against those goals.

Average revenue per user (ARPU) measures exactly what you would think, and proper integration ensures this can be measured over time and across devices and media. Re-Engagement Rate over the initial five-, seven- or ten-day period in which a consumer owns an app helps advertisers separate active users from less valuable ones. Other metrics combine revenue and engagement; Seven-Day Yield, for example, measures revenue and engagement over the initial seven-day period of ownership.

By integrating the costly enterprise CRM systems already in place in many of their organizations, advertisers can stop wasting so many appvertising dollars by ensuring that every campaign adjustment brings them closer to their best customers and others like them. In Kenshoo’s Mobile App Advertising Trends Report (March 2015), we found the average number of app installs per advertiser increased 182 percent and the average cost per install increased 19 percent over the course of 2014 (Jan – Dec). These trends led mobile app advertisers to increase their ad spend by 235 percent over the course of the year. Great, but the increased spend is wasted without proper CRM integration.

As advertisers continue to invest, those who make good use of their CRM systems can rest assured they’re taking advanced steps to make it worthwhile by re-engaging their most profitable users and driving downloads among like-minded consumers.