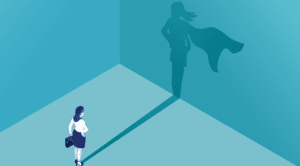 The international movement against sexual harassment and assault, #MeToo, has increased visibility for the challenges women face around the world. It’s also raised the stakes for brands who want to engage female consumers.

In the past two decades, the use of “femvertising”—marketing to women with themes of feminism—has risen sharply as the modern-day women’s rights movement gains huge popularity. Watershed moments like the Women’s March have left brands eager to capitalize on the supercharged consumer sentiment surrounding this topic.

However, feminism (the belief that women should be treated equally to men) isn’t a tagline. It’s a mindset that has sustained an ongoing and very real battle for women’s equality since the first-wave feminists of the 19th and early 20th century.

Profiting from these ideals while embodying the opposite is not clever, it’s exploitation.

An early example of femvertising is Dove’s “Evolution” spot, which earned millions of views for the provocative and unexpected way it used advertising to question society’s standards of beauty. The sentiment became the basis for Dove’s “Campaign for Real Beauty,” garnering buzz that provided 30X the exposure compared to the paid-for media space, and helping to sharply increase sales at Dove in the decade after the campaign launched.

Perhaps hoping for a similar outcome, many brands have since jumped on the femvertising bandwagon, seeking to attract not only female buyers, but Millennial consumers (and their $30T of spending power). More than nine in 10 Millennials would switch brands to one associated with a cause, according to research conducted at the HaaS School of Business at Berkeley.

Brands also seek the added exposure offered by these feel-good campaigns, which have the right formula to be shared widely on social channels (they’re often highly emotional and contain messages and stories empowering to women.)

The sobering side of femvertising

To date, many brands have pumped millions of marketing budget dollars into femvertising campaigns. On the positive side, they’ve helped to insert positive, empowering messages into the public narrative. Whereas, historically, many ads have created new insecurities, these reflect ideals of equality.

However, these story arcs are often only used when convenient, and are too frequently only deployed as lip-service by companies who exhibit less-than-ideal behavior internally.

Dove’s parent company, Unilever, also owns Axe body spray, a brand known for a history of wildly misogynistic campaigns. The disconnect between intention and action becomes clear when a consumer considers brands with such conflicting messages (Dove and Axe) side by side.

Fearless Girl, commissioned by State Street Global Advisors, was intended to raise awareness about gender diversity in corporate leadership. A noble cause! However, State Street recently settled allegations to the tune of $5M that it paid female and black executives at the firm less than their white, male counterparts.

KPMG’s uplifting video spot about women breaking the glass ceiling stands in stark contrast to its $400M class-action lawsuit alleging a pattern of gender discrimination, including denying promotions to women and penalizing them for taking maternity leave.

On the surface, Pantene’s ad encouraging women to stop apologizing should be celebrated for its empowering message. However, in context, there’s inherent conflict in a beauty product’s use of femvertising: women spend $426B a year on beauty products designed to conceal blemishes, stop aging, lighten their skin tone, and in so many ways change appearances to fit ideals. And, in a business context, they spend $141B more than their male colleagues, while earning less—an average of 79 cents to their dollar (if they’re white.)

Audi’s Superbowl ad focused on daughters (an expensive bet on femvertising) centered on the importance of gender equality as it relates to our daughters. But, consumers responded with criticism, many arguing that this was a disingenuous move as the brand hadn’t taken a public stance on the issue of gender equality previously in its marketing. In addition, Audi has no female board members to stand behind its rallying cry.

All this is not to say that these organizations must be perfect examples of gender equality in order to continue to be successful, however they invite criticism when they leverage ideals of feminism to profit without consideration for the responsibility they adopt by doing so.

When their own behavior does not stand up to feminism’s ideals, it creates a disconnect between a brand’s intentions, and its actions–and consumers are increasingly wary of that gap. It’s lip service, and nothing more.

Perhaps most importantly, when brands claim to be stewards of feminist ideals in their advertising, but do not live up to those ideals in practice, it has a direct impact on the women’s rights movement. There is a very real danger in companies exploiting feminism’s message without taking action to further the movement by diminishing feminism to a tagline, or a hashtag, instead of a mechanism to engage in the real, hard work of promoting true equality.

I call this trend in marketing to women “faux-feminism” and it contributes to an illusion of progress. It allows the millions of consumers who see these ads to believe equality is closer than it actually is, creating a diversity blind spot and obstructing the progress being made.

When those who have not experienced sexism see these ads, they mistakenly believe the challenges facing women in the workplace are fixed (or not real in the first place.) A study by McKinsey & Co. found that men are more likely to think the workplace is equitable; women see a workplace that is less fair and offers less support. We cannot solve problems we cannot see clearly.

The new rules of marketing to women on a feminist platform

So, in this new era of #metoo and femvertising, there are new rules for marketing to women using the ideals of feminism.

The reasons are two-fold: first, to avoid creating disillusioned consumers who will react strongly against a brand for acts of faux-feminism, and second, to protect the progress made to-date in the feminist movement, in a time when women’s rights remain under attack.

I’m not an advocate for all brands to use feminism in their advertising. But, if you’re going to capitalize on the movement, consider your responsibility first. There are three preliminary guidelines:

1. Think twice–Taking any stance as an organization on a politically charged or hot button issue is a risk, which will invite criticism from both supporters and opponents of the issue. But, it’s more common than ever, as many CEOs are adopting their platform as activists.

As content marketing expert Doug Kessler said, “Think hard about attaching your brand to things that matter way more than your brand ever could.” There are many avenues your marketing can take. Think twice, maybe three times, as to whether gender equality is the direction that makes the most sense for you.

Is your product is truly prepared to be a steward for the message you’re promoting? One recent example is Lean Cuisine, whose campaign surrounding women “having it all” invited loads of social media backlash due to the history of the brand’s low-fat frozen meal products perpetuating beauty standards. Ironically, it’s those standards that contribute to the pressure on women to, indeed, “have it all” in the first place.

2. Practice what you preach–Don’t just talk the talk, walk the walk. Ask the hard questions about how your organization manifests feminism’s ideals before you stand on this platform. That means transparently pay women equally to men, demonstrate women leadership at the highest levels of the organization and throughout the ranks, mandate supplier diversity, make unconscious bias training available to employees, provide strong family leave programs, deploy inclusive hiring practices, and most importantly, stop objectifying women in the marketing of other product lines or business units.

Before you approve this risky move to join the red-hot topic of women’s rights, honestly hold your company up to the ideals of feminism for scrutiny before you exploit the narrative for your own publicity.

3. Think beyond the hashtag–If you determine that your organization practices what it preaches, consider what else you can do to support women beyond the feel-good message of your hashtag. One recent example is Jane Walker, a campaign from Diageo on International Women’s Day that temporarily changed the Johnnie Walker icon to a female version (Jane).

On the surface it first seemed like lip-service (like McDonalds flipping its Golden Arches,) but digging deeper, the company’s dedication to women went far beyond Jane. The company donated portions of the sales to organizations supporting women’s progress, they joined the CEO Action for Diversity and Inclusion, they boast a vocal, female CFO who is clear about the importance of inclusion at the organization, and the makeup of both their board and blenders is nearly half female.

The onslaught of femvertising has created a sense of disillusionment among consumers who are rightfully holding brands up to the standards of the feminism movement they claim to be part of.

If we can’t hold our organizations up to the scrutiny of true equality, we should never cheapen the movement by exploiting the narrative. It’s too reckless and there are real consequences. Our society, and our consumers, deserve more.

We can and must do better. Marketing is a powerful force: one with the potential to change ideas and create positive action. Use that power thoughtfully.

Katie Martell is a marketing strategist and top 10 marketing writer on LinkedIn. She can be reached at @KatieMartell.

This article was first published in May 2018 and is updated regularly.