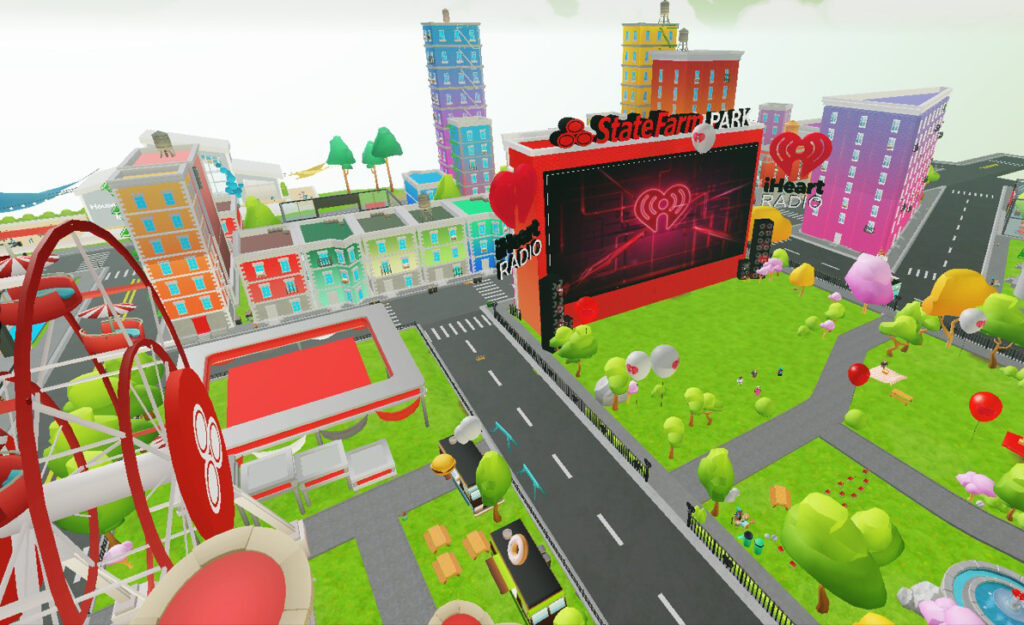 Consumers may not initially equate live music, gaming and the metaverse with an insurance brand—but with its recent launch on Roblox, State Farm is looking to change all that.

“We’re in a category that not many folks wake up thinking about every day,” said Alyson Griffin, Vice President of Marketing at State Farm. “It felt like the right next steps… showing up where our potential and future customers will be in new, interesting ways—but that are authentic to how they think about us in the real world.”

That’s the idea behind its new metaverse activation iHeartLand, a music-themed interactive experience on Roblox created in partnership with iHeartMedia and Intel, featuring live, virtual concerts, gamified music composition, branded worlds from State Farm and Intel, and much more. We spoke with Griffin and iHeartMedia CMO Gayle Troberman about the value the experience is creating for the companies involved, the advantages of cross-brand promotion, the importance of collecting data and insights through testing and advice for brands who are looking to build a presence in the metaverse.

Chief Marketer: There’s a lot of talk about the metaverse at the moment, but not every brand is participating quite yet. Why is that important for your brands to get involved?

Gayle Troberman, CMO of iHeartMedia: At iHeart, we believe in democratizing access between fans and artists and brands and podcasters at scale. We’re always about testing and learning in new spaces, to go wherever the fans are, and to try to create those once-in-a-lifetime experiences and moments. As we saw how big the numbers were, particularly the metaverse gaming platforms that already have high usage and hundreds of millions of consumers engaging on a regular basis, we thought what a perfect place to create new experiences that bring music and gaming together, which is a new space for us. We believe in going everywhere fans are and figuring out what the right experiences are between the fans, the brand and the artists. And that’s exactly what we’re in the middle of with our friends at State Farm.

Alyson Griffin, Vice President of Marketing at State Farm: For State Farm, I’ll just lay it out there: We’re in a category that not many folks wake up thinking about every day. And I’m saying it with a huge smile on my face. Not only that, but we are not a global brand. We operate only in the United States. And just like for every business around the globe, the buying power of the under 40 crowd is immensely important to all brands globally. So we are trying to think of interesting, exciting, unexpected ways to show up to generate future demand. When Gayle started talking to us about this opportunity with iHeartLand in the metaverse, I jumped in really fast because we can replicate what we do naturally in the real world. We show up with stadium sponsorships, for example, naming rights and gaming. We’ve been in gaming for over a decade and we are a big sponsor of audio, with iHeart as an example. It felt like the right next steps… showing up where our potential and future customers will be in new interesting ways—but that are authentic to how they think about us in the real world.

CM: Using your mascot, Jake from State Farm, as a way to engage with players seemed like a smart choice.

AG: We were fortunate to have a little bit of learning here. Jake was the first non-playable-character in NBA2K, maybe a year and a half ago now. We did a lot of learning and testing. Will people approach him? If they do, how long will they interact with him? If they interact with him, will they spend their money on a skin, which is khakis and a red shirt? All that kind of stuff. So when we were talking to Gayle and the iHeart team about the metaverse, it was a no-brainer that we would want to put Jake in it.

And then the final act that we have is literally the words “like a good neighbor, State Farm is there,” but also the notion of what it means to be a good neighbor. Jake’s able to represent that good neighbor spirit in the game. 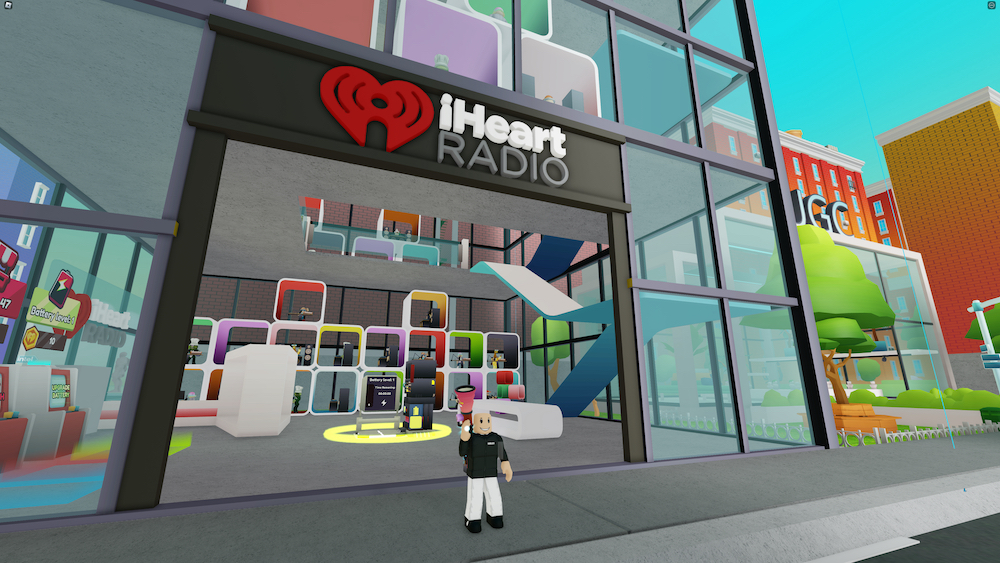 CM: There are some synergies between your brands. Can you talk about the value of cross-brand promotion here?

AG: For State Farm, we were already good partners with iHeart. And what I mean by that is a partner who understands our culture, understands what matters to us, has worked with us and activated for a long period of time and knew what our brand safety guidelines were. That really matters to State Farm. So, right out of the gate, there was a trust with iHeart in particular. We were both jumping in, and I think I can say for both of us, this was a leap—no small amount of money here. So the synergy there, at least to start, was: At least we are doing this with someone who understands how important our brand safety and attributes are.

The other reason that iHeart was a really great choice for us was the scale. They’re reaching nine out of every 10 Americans, and the media mass network of broadcast and podcast, where we are already enjoying a lot of benefit, is something that was important to us. Again, because we are not a global brand, and to surround people in the United States with our message is difficult [when you] just have the power of one country. This reach that iHeart has was really critical to agreeing to go into it.

GT: You see a lot of brands jumping into the metaverse or opening their own parks or land, but it’s a real commitment to program new content and new experiences on an every day, every week, every month basis. The equation is great for iHeart and for the brands and for the artists who perform in the metaverse at State Farm Park and iHeartLand because we have the promotional power to go on iHeart’s broadcast radio stations, across iHeart’s podcast network and our streaming platform. And we can rally users and tell consumers every day about what’s happening in Roblox, in Fortnite, and we can pull consumers in on a regular basis. And there’s consumers who may not even go to iHeartLand in Roblox, but will know that those things are happening and they’ll hear about State Farm Park and then they’ll understand the brand is about innovation and engaging consumers in new and fun ways where music and gaming collide.

CM: Music and sound branding are key features of the activation. Do you see audio playing a pivotal role in the development of metaverse activations moving forward?

AG: Yes, audio will be part of the metaverse. And music. My guess is that it’ll be fully immersive. One of the interesting things is that we have stadium rights in the real world. And if Charlie Puth was playing a stadium, maybe he would do multiple days or he would have to go on a world tour to hit the number of people who attended the State Farm Park iHeartLand concert that he just did in one go. That notion of democratizing access to these famous artists is really appealing to us. And I think that the metaverse provides that opportunity. I don’t have to get on a plane. I don’t have to pay for this huge ticket. I don’t have to wait until the summer—whatever it is. I can just attend in the metaverse.

GT: If you’re Charlie Puth or Lauv, which are the two concerts we’ve done to date, as an artist it’s an amazing experience, too. Charlie got to perform once, and that concert was probably the equivalent of doing 50 to a hundred sold out shows in Madison Square Garden. So all of a sudden he’s got so many of his fans, as Alyson said, who can access a new experience. Now, how concerts evolve and what exactly is the interaction and the interplay between the music and the gaming experience, that’s one of the big new questions that we’re all just learning about. But the music community is equally interested in figuring out the right interaction between a performance and their music and the games and the experience. It’s a whole new way to see a concert and not just be sitting in a seat.

AG: This is just pondering the future of the metaverse, but it occurs to me that it could potentially be the present-day radio or television, where it’s a gathering place for the family as well, depending on what is happening in the metaverse. Most people think it’s the kids and they’re putting on a headset and stealing themselves away. And maybe some of that is true, but with these kinds of experiences evolving, I think families can participate together and talk and discuss—the way the radio and the television changed family dynamics when they were each introduced.

Stay tuned for part 2 of our conversation with iHeartMedia and State Farm, to come later this week on Chiefmarketer.com.