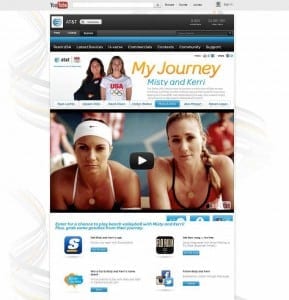 Remember when synergy was the big buzzword? The word may not be bandied about as constantly as it once was, but with its summer 2012 campaign introducing its latest tagline, AT&T showed that the concept is still sound.

AT&T was an official sponsor of Team USA for the 2012 Summer Olympics. Also that summer, it rolled out “It’s What You Do with What We Do” as its brand messaging. To make sure the message didn’t get lost, it asked seven Team USA athletes to tell of their four-year journey to the Olympics—and how they used AT&T technology along the way.

Working with The Marketing Arm, AT&T posted seven films, one focusing on each athlete, on its brand and mobile sites, YouTube, and Facebook. The athletes shared the videos among their social channels as well. AT&T also enabled viewers to download at no charge the apps and tunes that the athletes used and referenced. In addition, it sponsored contests in which fans could win a favorite item of an athlete (Allyson Felix’s beach cruiser, Ryan Lochte’s skateboard) or a chance to interact with the athletes themselves—for instance, in a game of beach volleyball with Misty May-Treanor and Kerri Walsh.

The campaign was also highlighted each night during NBC’s primetime coverage of the Olympics, which directed viewers to AT&T’s website, and was integrated into Telemundo’s Olympic broadcast features.

During the two-week promotion, AT&T had hoped to generate more than 500,000 views of the videos online; it received nearly 675,000 views. The campaign garnered more than 145 million social media impressions during that time, and viewers downloaded nearly 50,000 free songs—a sure sign of engagement. And research showed that for nearly half of the consumers exposed to the campaign, it had a “somewhat positive” or “strong” impact on their willingness to recommend AT&T.