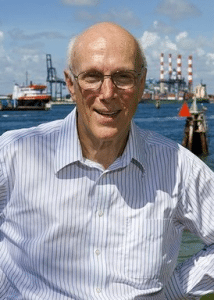 Hughes was the founder and vice president of The Database Marketing Institute, and crafted email and database marketing strategies for Fortune 500 companies and other firms for over 30 years. He was the author of 11 books on marketing and economics and published his final book, “About Face! Why the World Needs More Carbon Dioxide—The Failed Science of Global Warming,” earlier this year. Hughes was a sought-after speaker at industry events and was a prolific contributor to numerous marketing publications, including Chief Marketer and Direct.

“He was an avid storyteller who lived his life fully and passionately,” wrote his granddaughter, Sarah Shielke. “Arthur was a man who lived and loved in a way that ensured he would always have stories to tell and that he would always be surrounded by family, friends and admirers eager to hear them.”

Peggy Garner, director of marketing communications at KBM Group, worked closely with Arthur when he was at KBM, finding him speaking engagements and helping him place articles in industry publications.

“I kept in touch with him after he left KBM Group through email, Facebook and the occasional phone call. He always had the most interesting stories to tell,” says Garner. “I remember a story he told me about a speaking engagement in Brazil. It was a paid gig and when he arrived the event organizers handed him a suitcase full of cash! He wasn’t sure what to do since walking around with thousands of dollars in cash certainly wasn’t safe.”

“I remember one time at a DMA conference we were doing a book signing for one of his latest books and the people started lining up early to meet him,” she says. “Most of them were young and from outside the US. They were so excited to meet him and wanted to take a picture with him. I told him he was a rock star!”

“Arthur was truly one of a kind,” added Jerry Bernhart, principal of Bernhart Associates Executive Search. “People looked up to him as sort of a grandfather figure, kind of like your favorite professor from college.”

One of Hughes’ great strengths was his ability to explain complex ideas in a way everyday marketers could understand, Bernhart recalled. “His presentations at NCDM and DMA were always among the most popular. He was the one who encouraged me to pursue database marketing as a recruiting specialty, and many people don’t realize that I actually placed him three times—that’s only happened with a handful of others during the course of my 25-year recruiting career.”

The last time Bernhart placed him at a new position, Hughes was in his early 80’s. “That’s absolutely amazing when you think about it. He had as much energy as people half his age, and he was writing and speaking up until the end.”

Most marketers probably didn’t know that Hughes was a skilled pianist, noted his granddaughter Shielke. “He was known to improvise songs, rhymes and story-telling at the piano, captivating all who had the fortune to observe firsthand yet another instance of Arthur punctuating our otherwise banal world with his full creative capacity.”

Hughes leaves behind his wife, Helena, four children, nine grandchildren and one great-grandchild. There will be a Mass Memorial service on October 25, at 11 a.m. at Saint Sebastian Catholic Church in Fort Lauderdale.