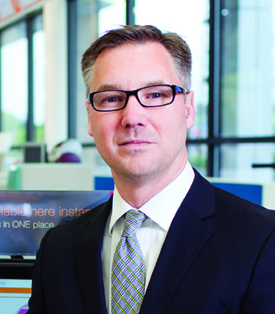 What would you do in this situation? You're a 112-year-old pharmacy chain with all the brand equity that longevity brings, but also all the aging-infrastructure issues. You've built out over the years to the point where two-thirds of the country lives within three miles of one of your stores, so there's not much point in opening new locations, besides the 7,700 you already have. Meanwhile, that nation's populace is getting progressively older, with new healthcare needs; and you're facing new competition—not only from other retail pharmacy brands, but from big-box multi-brand retailers that want to draw off those customers. Again—what do you do?

If you're Deerfield, IL-based Walgreens, you transform yourself both in the real world and, perhaps more crucially, digitally into a new life-care destination for consumers. You halve your store-open rate, remodel units where it makes sense, and expand product inventories to include more grocery and general merchandise. But you also devote resources to building out services in mobile, social and the web that are both convenient and content-rich, in the expectation that those efforts will build loyal customers and, over time, revenues.

"Walgreens has determined through research that customers reached via multiple touchpoints are three-times as valuable as those who only reach us through one," says David Lonczak, vice president of ecommerce for the chain. That makes a multichannel strategy more important, and tech-adoption rates make it more feasible.

"Consumers are growing more comfortable with technology, and they have a great desire to do research on their own before they buy—in any channel," says Lonczak. "That makes it imperative that potential customers can access Walgreens in any form, when and where they want to."

To support that strategy, Walgreens embarked a few years ago on campaigns that would make those neighborhood pharmacies more central to the lives of their customers by changing within the walls and, just as important, by extending service and utility to all the other screens customers now use to run their lives.

Drugstore in Your Pocket
"We always knew that the mobile platform would be a great bridge to enable the multichannel experience," says ecommerce CTO Abi Dhar. "We also knew that our brand represented convenience and a trusted pharmacy to customers. So we wanted to be sure to bring those attributes to the mobile channel."

Simply optimizing the website for mobile access in late 2009 taught Walgreens an early lesson that "we really were sitting on a very powerful channel," says Dhar. And it set the chain on interlocked development paths for the mobile web, mobile messaging and the Walgreens smartphone app.

For example, in SMS the chain began about 18 months ago by offering a "Refill Ready" text alert service that minimizes the time customers spend waiting in the store for a prescription to be filled. Customers submit their prescriptions in the store, then opt in to receive an alert at www.Walgreens.com/textalerts (where they need to create a Walgreens account and enter their mobile number). They can then leave the store and be notified when their prescriptions are ready for pickup.

The Walgreens team conceived of this alert feature as a pure-play customer service meant to take some of the inconvenience out of getting prescriptions filled. Walgreens doesn't use the mobile numbers it acquired to send marketing messages, either. Customers can sign up instore or at the website to receive up to five special offers a month on their phones; but that's a separate opt-in entirely.

"As we designed the messaging, our first impulse was to say, 'While we're talking to customers, we should ask them to do this and to sign up for that, open an account, and so on,' " says Dhar. "But customers trying to refill prescriptions over the phone have a particular mission to accomplish. And we found that if you let customers do, very efficiently, what they came to do, they will come back to you."

"Whether it's in the alerts, on our smartphone app or on the website, Walgreens has always been focused on how we can add value to your life, how we can help you get well," says Lonczak. "The app, the text alerts not only make your life more convenient, but help you adhere to your prescription regimen. That's going to make you a healthier person."

That SMS feature was supplemented in October 2011 by Refill Reminder, an opt-in service that lets registered customers know when medications they have on file with their local Walgreens are about to run out. Customers can respond to the text by simply replying "REFILL," and then pick up the prescription at the Walgreens store they've designated in their account.

Since the initial launch 18 months ago, the Walgreens text alert programs have grown into a great success, with more than 3 million customers opted-in to date. "It's shown us the tremendous power of text messaging as a way to reach the widest audience possible with a service," says Dhar.

Smartphone Success
As successful as the SMS refill platform has been, Walgreens raised the bar substantially in October 2011 with the launch of the Refill by Scan feature, which was rolled out in the company's first Android app at that time and was shortly thereafter retro-engineered into its existing iPhone and Blackberry apps.

Refill by Scan lets a user open the app, point it at the barcode printed on the side of a prescription bottle, and click. The app then checks the prescription on Walgreens files, determines whether it is available for a refill, and sends back a message that the prescription will be ready for pickup (usually the next day) at the store where the prescription had been filed.

Walgreens marketing claims that prescriptions can be refilled by scan in less than 30 seconds using the app, and experience proves that out. Even more important, the app's utility has made it a strong favorite with Walgreens smartphone users, who have given the app a 4.5-star rating and made it one of the most downloaded apps in the iTunes lifestyle category. The app also won several categories of the 2011 Webby Awards, including "Best Integrated Mobile Experience".

Simplicity was baked into the app, says Dhar. "It's almost as important what you don't do as what you do, when it comes to a mobile app," he says. "Once it gets out there in the wild, you don't really have control over it. There are customers walking around with versions of our mobile app that are four-months old or more. So you really have to think about what's going to be useful."

While the company will not reveal the number of downloads, Lonczak says there's a metric more important than such raw data. "It's about engagement," he says. "You can spend a lot of money and get fans or users or downloads or get people to visit a site—all things that are at the very top of the funnel—but it's the engagement, the stickiness, the usefulness of those functions that keep people coming back and appreciating you as a part of their journey to well."

He says the mobile results have been very satisfying for Walgreens. For example, the company now reports that 40% of the prescription refills done online come in through the mobile channel.

There's also a roadmap for ongoing enhancements to the mobile app. From its launch, app users have been able to view a digitized version of the weekly store circular customized for their area (as can mobile site visitors). Last November, the company also began adding scannable coupons to the smartphone app, giving users access to discounts and deals via coupons that could be scanned by readers at the point of sale without paper printing.

Reaching Further
Walgreens is also working to extend its stores' reach in channels other than mobile. The ecommerce effort was aided by the company's March 2011 purchase (for $409 million) of pure-play online health and beauty retailer Drugstore.com. That buy gave Walgreens access to an inventory of 60,000 health, beauty, vision and skin care products, most of which had not been in the brand's traditional retail inventory of about 18,000 products.

While the company is still working on plans to integrate the Walgreens.com and Drugstore.com sites—under the guidance of Lonczak, who was Drugstore's CMO at the time of purchase—it has made clear that it sees ecommerce as a complement to instore retail sales. Last October, ecommerce president Sona Chawla told a Forrester Consumer Conference audience that the expectation is that, eventually, customers will go to Walgreens.com for mass health or beauty needs, but connect with Drugstore.com and its Beauty.com affiliate for hard-to-find prestige products in those categories.

"We intend to be a one-stop shop," she said of the two sites, "allowing customers to trade up or down as they prefer."

In Chicago, Walgreens began testing a different online/offline integration last June by offering Web Pickup at 300 area stores (now up to 480). Customers can go to Walgreens.com/webpickup and to see if the Walgreens they want to shop is participating in the pilot, browse the real-time inventory of that store, and fill a shopping basket with any item except prescriptions. They can then pay for their purchases online and pick up their orders in the store—in as little as an hour, if necessary. Some stores even offer to bring the order out to a curbside pickup area when customers call in to a central toll-free number. (Those stores are identified at the website.)

The brand is pioneering other cross-channel efforts as well, from online live chats with pharmacists on its website to a searchable drug and supplement database accessible through Facebook, in partnership with interactive platform Sharecare. Last March, Walgreens reportedly became the first retailer to offer scannable point-of-sale coupons for checking into its stores on Foursquare, sending out coupons for national brands without requiring texting or other intermediary steps.

Company research underscores the belief that customers who come in through these divergent channels will tend to make more frequent store visits and remain more loyal to the Walgreens brand, whether online, in mobile or down on the corner, Lonczak points out.

"We've found that 50% of the 1 million visitors to our ecommerce sites say their next action will be to go to a Walgreens store," he says. "And 82% of customers who have used our live pharmacist chat report that they're likely to fill prescriptions with us."