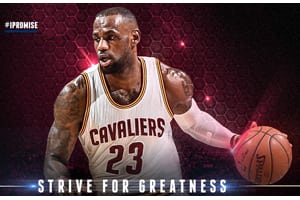 I love basketball and I love the NBA—especially LeBron James. But not for the reasons you may be thinking.

It’s early November and the NBA season is upon us. The crowds of fans that fill baseball stadiums whittle down to smaller masses heading indoors to watch the greatest athletes on the planet take to the hardwood.

LeBron James is an exceptional talent. He’s a socially-conscious and mindful role model, unlike some of the folks on TV when I was growing up. But what fascinates me and has inspired me the most is LeBron embracing the Player Efficiency Rating (more commonly known as PER) as one of the key metrics for evaluating his own performance. The PER is a complex statistical analysis (not without its detractors) that does the yeoman’s work of measuring an individual player’s performance. It is calibrated against the league. It is calibrated against benchmarks. It is calibrated in such a way that one can finally compare: starters to those coming off the bench, point guards to centers, and my generation to yours.

The essence of the metric is efficiency. It does not value total points scored, for example. It values the shots taken to achieve those points. The Field Goal percentage. The free throws. It is worried as much with the output as the inputs required to achieve that output. Which means it factors in the shots you miss as much as the shots you make. You can’t game the system by scoring more points because you took more shots. Taking more shots may get you some gaudy numbers, but it will hurt your team…and it’s going to hurt your PER.

As I look forward to 2016 planning and reflect on my role as a CMO, I realize I have to think more and more like LeBron James. Efficiency. And yes, I concede, part of the benefit of writing this article is getting the opportunity to compare myself to LeBron James, even if it’s one hell of a stretch.

Take content marketing. Some people say we’re in the golden age of television. “Game of Thrones” and “The Walking Dead” make me believe it. Shonda Rhimes…makes me question and be concerned about everything. But this isn’t about TV or “Scandal.” I think we’re in a golden age of customer communication and content marketing. I am consistently impressed by the content I come across, especially in the B2B space. As a CMO, I am a target of countless communications. Folks like NewsCred, Contently, HubSpot, and Adobe all impress me with the content sent my way. Even if I’m not a consumer (yet), I’m a fan.

But as I mentioned, I’m a target of countless communications efforts. And so few actually land. So few resonate. As Marketers, we have to step back on the amount of content we produce and instead focus on the quality of that content, and then the amplification of that content. Make each video, one sheet, blog post, and ebook count by focusing as much time on amplification as you did on production. Just like LeBron James does his best to make sure every Cavaliers possession counts.

Take lead generation. Every person reading this article would agree that one of the primary goals of marketing is to drive leads to Sales. But it’s not the volume of leads that matters. It’s the quality of the leads. Marketers can’t be happy with generating an exceptional number of leads, they have to be focused on driving exceptional leads at an exceptional number. As we look to our 2016 plan, we have moved our focus downstream and are setting our targets against our final downstream revenue number.

We will continue to use more traditional numbers (ratios between marketing and sales qualified leads, win ratios, client engagement post launch) to troubleshoot. Just like LeBron will look at the types of shots he takes to drive his numbers. It’s about turning a number that once was a goal (number of SQLs) into a tool we can use to diagnose our ability to hit or miss the ultimate goal we’re looking at: revenue.

Take publicity. I feel a massive amount of sympathy for journalists covering any business sector or trend these days (though perhaps a little better than I did a couple of years ago because I believe things are improving.) Too often their inboxes are flooded with generic pitches with selfish promotion submitted via blast by someone expecting to be covered. It doesn’t work. It’s inefficient. But more importantly, it’s disrespectful to the person on the other end of that pitch.

As we approach 2016, we’re focused more and more on becoming a resource to the people whose work we respect and value authentically. We are minimizing our pitches, and when we do pitch, we are taking the time to make sure we’re setting up the right pitch to the right person, on a topic of interest to them and in their sweetspot. We may not score every time, but by doing our best to focus on the journalist’s strengths and interests instead of ours, we think, in the end, everyone wins. We’ll waste less of our time pitching, and they’ll spend less time ignoring. It’s not dissimilar to LeBron James as a facilitator. Just passing a ball to someone doesn’t get you an assist. Knowing your teammates’ strengths and weaknesses is essential to turning that pass into a score for them, and an assist for you.

Take process improvements. One way to improve productivity is to take the most complex of things and make it second nature. Almost muscle memory. By planning ahead, by setting clear goals—and mostly, by  practicing over and over again, you can start to save time. One example of this is a weekly video series we produce called LiveIntentional. When we first launched the video series, it wandered a bit from topic to topic. It served too many masters, balancing updates on various bits of industry news while trying to remain relevant to our own products and services.

Video is something we know we need to keep doing (we understand that mid-funnel engagement and mobile engagement both require successful video strategies) but we couldn’t spend days on it. So we rethought our craft. We focused on what we were good at. And we simplified our options. By doing so, we’re able to produce one of our most unique pieces of content with 3-4 hours worth of work each week, shared across 3 different people. From ideation through to production and delivery. If you look at LeBron James, he’s notorious for adding one new shot to his game every year. He then spends the offseason and year perfecting it. Which puts him in position to introduce something new to his repertoire down the line.

LeBron James has changed the NBA. He’s changed what it means to be a player and a role model. But his style and approach have me rethinking how I fulfill on my job as a CMO.

Suneet Bhatt is CMO of LiveIntent.