Pringles has taken another major step to connect with coveted young esports fans—a series of commercials that will air in stadiums during esports events throughout the year.

Carl Kuhn, account director for esports at Jung von Matt/SPORTS gave the brand kudos for its creative approach to the spots, which will also appear digitally on platforms like live streaming platform Twitch.

“When you look at the films of various brands in esports today, you see little that is new,” Kuhn told esportsinsider. “Fans in jerseys, stadium shots, fast cuts and fast music. Many non-endemics that are new to the market just copy the learned mechanisms from endemic brands. Pringles, on the other hand, have seized the opportunity and chosen a different approach, leveraging their brand DNA. The result is a humorous concept that celebrates the esports community and its facets.”

Pringles began it esports partnerships in 2017 with the world’s largest esports company ESL, formerly Electronic Sports League, by sponsoring a single event in Germany. In 2018, two more European events were added. This year, it greatly expanded its deal with ESL to sponsor seven events across 13 European countries.

“2018 was a very successful year for Pringles in Northern Europe,” Dominik Schafhaupt, Kellogg Co.’s marketing manager snacks Northern Europe, said. “Especially in the field of esports we see a great development of brand perception and get very positive reactions from the community. Therefore, we decided to expand our footprint together with the ESL not only geographically but also qualitatively. At the moment we are finalizing new concepts with which we would like to address the community with even more relevant communication and activations, on-the-ground at events but also digital.”

Brands are expected to invest $1.2 billion U.S. dollars in marketing and sponsoring esports related events in 2020, up from $517 million in 2017, according to Statista.

The audience is highly attractive to marketers seeking to reach young, largely male consumers although female viewers and players are on the rise. In 2018, the number of frequent esports viewers and enthusiasts amounted to 173 million, a number projected to reach 201 million in 2019. The player base is also huge. League of Legends was a leader based on number of esports players. In the “presented period” the game had a player base of 100 million, while World of Tanks ranked fifth with 12.3 million players in the measured period, Statista reported.

In other Pringles news, a summer promotion calls for people to taste the brand’s latest Mystery Flavor for a chance to win a $10,000 cash prize. 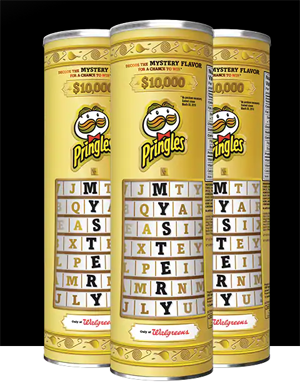 The crisps are available for a limited time through July 30 exclusively at Walgreens stores. Players take a photo of their receipt to qualify the purchase and then enter their Mystery Flavor guess. The last day to submit is Aug. 13. The contest winner will be revealed on or about Aug. 18.

To boost participation in parent Kellogg’s Family Rewards program, players must submit through their member account or join the program.

The contest marks the first time Mystery Flavor has launched in the U.S. Pringles Canada launched a Mystery Flavor in 2018 awarding one winner with the $10,000 grand prize for their Seven Layer Dip guess.

“To continue to meet consumers’ desires for unique snacking opportunities, we strive to create new, innovative flavors that excite fans and introduce even more Flavor Stacking combinations,” AnneMarie Suarez-Davis, VP of marketing, Pringles, said. “The Mystery Flavor will bring a new insanely accurate Pringles flavor to shelves and reward one lucky fan who can guess the flavor correctly.”

Once the new flavor is guessed, the product will join other former limited time only unique flavor offerings, such as Jalapeño Bacon, Sweet Chili Tango, Jamaican Jerk and more.