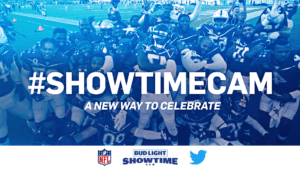 The NFL kicked off this week. And as has been the case for other major league sports, tech-fueled virtual engagement is how the league—and brands—have interacted with fans while adhering to social distancing practices.

Michelob ULTRA created an experience for the NBA that brought fans into the Orlando bubble virtually. Similarly, Bud Light—the NFL’s official beer—has invented the “Bud Light Showtime Cam” to bring fans inside stadiums and closer to players’ reactions during the game.

After big plays happen, players will celebrate by interacting with a dedicated camera on the field. There’s also a chance for fans’ tweet to be highlighted on the cam. Bud Light will randomly select fans who tweet #ShowtimeCam and #BudLightSweepstakes throughout the season. The camera feed, which debuted during the first game of the 2020 NFL season Sept. 10, will appear in broadcast, on NFL.com and Twitter.com and be featured at future match-ups throughout the season.

Meanwhile, Yahoo Sports has created technology to enable fans to have a co-watching experience together through its app. The new, free video tab feature allows fans to watch local and primetime games on the app, video chat on their phones and see replays of key moments through using NFL’s proprietary Nex Gen Stats player tracking data. Users can invite up to three people to watch a synchronized livestream together and interact with one another. Yahoo also debuted a new augmented reality experience, Yahoo Sports PlayAR, that allows fans to experience replays of key moments together.

Snap also unveiled a special augmented reality lens this week that kicked off with Thursday’s Kansas City Chiefs versus Houston Texans matchup. The lens gives viewers an insiders’ look that they wouldn’t have had previously by taking fans from the Chiefs’ locker room through the tunnel and into Arrowhead stadium—with music and crowd cheers to boot. It will be available on other gamedays but will transform into a more generic NFL stadium.