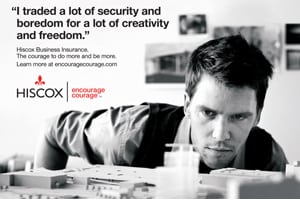 Companies that think branding doesn’t matter in the business-to-business world are making a mistake.

“Branding and brands certainly matter in the B2B space,” said Russell Findlay, CMO of Hiscox, which markets liability insurance for small businesses. “The risk can be so high [to buyers that brand recognition is essential.”

Hiscox is a sister company to Lloyds of London, a venerable 116 year old brand. But it has only existed as in the United States as Hiscox for about 10 years, and only promoted itself for six.

At the recent BMA16 conference in Chicago, Findlay noted that the branding challenge for Hiscox was to create something different to entice those who didn’t know the company, but at the same time retain a comforting familiarity for those who did know the brand.

When Findlay joined the company, he inherited three different marketing groups the company wanted to morph into one. There was a direct response team reporting to the head of small business, which was tasked with driving online sales; a broker marketing group reporting to the head of sales, which created sales materials; and a PR/communications group that the global communications team took responsibility for, which worked on driving earned media. The new plan was to have the head of marketing, who reported up to the CEO, oversee all of these functions

At the onset, the company did an internal audit, conducting several stakeholder interviews. It also wanted to evaluate the competition and then develop and test some positioning theories.

Internally, the brand found that it was viewed internally as being responsive, heroic, scrappy, smart, cutting-edge and uncompromising, among other attributes. But it needed to synthesize that down to one thing.

Hiscox looked at the competition and found there was an opportunity to think about creating more customer-centric communications, and talk about what customers want, rather than just talking about themselves.

A recurring theme in their competitors’ marketing centered around “what if” and “unexpected moments,” he said. Everything seemed to be built around fear, and dialing up the fear factor.

“Fear is a short term motivator—it can come from anywhere and you’re going to have to react to it,” he added. “But it won’t be inspiring and it won’t be motivational.”

Instead, Hiscox wanted to create the idea that buying insurance should be a liberating experience that would help alleviate fear and risk. The position, Findlay said, seemed unique and ownable.

The word “risk” itself was difficult to use, because it is so much a part of the insurance vocabulary. Instead, Hiscox modified the concept to “Encourage Courage,” centering on the idea of enabling people to do more and be more, and that Hiscox would be with them on that journey.

Taglines in the accompanying campaigns that emphasized this empowerment included “I taught her how to ride a bike. I can teach her how to run my company,”; “My business runs on ideas. And a tiny budget,”; and “I don’t worry about getting sued. I plan for it.”

To bring the new brand to life, the brand did several things, including create several research studies such as the “DNA of the American Entrepreneur” report, and the “Hiscox Embezzlement Watchlist.”

It also positioned itself at events that encourage the concept of courage, such as the Becoming a lead sponsor at the Austin Film Festival and a sponsor of the hardcore Tough Mudder obstacle course races. There was extensive branding at these events, as well as video clips on social media that showcased the type of courage it takes to participate in the competitions.

After the campaign was implemented sales volume and revenue saw double digit increases. The company also saw brand awareness go up five times, as well as an uptick in brand affinity.