Mountain Dew and KFC are partnering with a new beverage exclusive to the fried chicken seller. 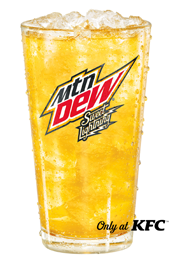 Sweet Lighting is billed as a throwback to southern charm and hospitality—a refreshment “lit up with a punch of peach and a touch of honey flavors.”

MTN Dew is supporting the launch with the introduction a new character named, of course, Sweet Lightning (Sweet for short), who’s landed a job with the Colonel. As part of the rollout, MTN Dew and KFC have released a teaser video and will roll the full digital video of Sweet’s pitch to the Colonel later this month. Sweet can also can be found on his LinkedIn page.

Paid media will be placed across Twitter, Facebook and Instagram to increase the impact of the conversation between @Mountain Dew and @KFC. In addition, a custom program is launching with partners like Reddit featuring high impact rich media digital ads to create excitement across the country about Sweet Lightning.

Sweet Lightning is the first exclusive beverage to be offered at KFC. For DEW, this is only the second time the brand has partnered with a quick-service restaurant—the first being the hugely successful Baja Blast which debuted at KFC’s sister restaurant, Taco Bell, nearly a decade-and-a-half ago.

KFC will include Sweet Lightning in upcoming promotional advertisements. It also will spotlight the new beverage in-restaurant via merchandising, including at drink stations.

The beverage will be rolled across the nation by July 1.

“My career as a peach pitchman started on the family farm, picking sweet ones when I was just a seedling myself.”—Sweet Lightning’s LinkedIn

“Like KFC, MTN DEW is inspired by bold ideas and flavors, making this an authentic relationship from the start,” says Nicole Portwood, vice president of marketing, MTN DEW. “To come together on an exclusive product—Sweet Lightning—is a thrill, and we look forward to delighting our customers’ taste buds and pushing the envelope on creativity.”

Sweet Lightning was developed in partnership with the food and beverage innovation experts at KFC and MTN DEW to create the perfect pairing for KFC’s Original Recipe fried chicken.

“With the addition of Sweet Lightning, we now have a drink that is as unique to KFC as the Colonel’s secret blend of 11 herbs and spices,” says Andrea Zahumensky, CMO, KFC U.S. “And like our world-famous fried chicken, Sweet Lightning will keep fans coming back for more.”