Vending machines can move people to places they didn’t think they could go. The money goes in. Nothing comes out. The kicking and shoving begins followed by the cursing and stomping away in disgust.

Coca-Cola has a plan to end the madness. 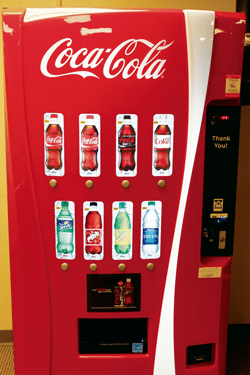 Moving far beyond the eye-catching touchscreens the beverage giant displays on it vending machines, it has a plan to let its Coke lovers communicate with those oft frustrating hunks of metal. The idea is to make the process of purchasing a Coke fun and seamless by developing a compatible mobile bot that lives on smartphones. This would give consumers more direct contact with the brand when the it is distributed through a third-party channel, like a vending machine.

In addition to making the vending process more streamlined and error free for its consumers, Coca-Cola will be the recipient of  a boatload consumer data from those using the bot. Consumer tastes and purchase history can be mined for remarketing and to encourage loyalty. Apple-pay enabled machines are already in use in thousands of the machines.

The bots are expected to roll out over the next few weeks at select locations in the U.S., Australia and New Zealand, according to The Drum.

Marketing technology is also playing a leading role in how the new Coke No Sugar beverages get into consumers hands. The new campaign, “Say Yes,” currently in Australia, includes a TV spot that allows consumers to use the mobile app Shazam to download a voucher for a sample. At out-of-home ads in Sydney’s Pitt Street Mall people strolling by can just ‘Say Yes’ to the ad to get a free sample dispensed from a refrigerated panel. Some two million samples are expected to be distributed between June and August.

Last month, Coke and agency partner McCann Bucharest, came up with a clever packaging innovation targeting Romanian teens. A detachable label on Coke bottles doubles as a wristband for possible entrance to popular music festivals. Millions of the “Festival Bottles” are on store shelves with eight different wristband designs that carry a barcode. Customers download the Coca-Cola app to scan the code to find out if they have won. If so, the Coke wristband is then used to allow entry to some of the largest music festivals in Romania, including Untold, Romania’s largest electronic music festival based in Transylvania.

Millions of Coke No Sugar Samples in Australia Delivered Via MarTech

In New Campaign, Coke Pairs Beverage with Paella and Lobster