MillerCoors wanted to make a big summer splash with a small brand—Keystone Light. Amid a sea of premium brands that dominate the summer months, Arc Worldwide/Leo Burnett faced a tough goal of increasing P-O-P orders from the previous year. Its strategy included getting the distributors on board; identifying on-brand cross-merchandising partnerships to help the field team’s sell story; providing added value for the retailers and ultimately enhance the consumer experience by increasing convenience store penetration. This would mean stealing share, volume and display opportunities from its chief competitor, Natural Light.

To reach its simple, rough and ruddy male target, pegged “the Cruiser,” research was conducted to understand the cohort. Results indicated that summer was all about get-togethers with male friends, dubbed “Bro-ments.” Beer is a key ingredient in these male-bonding occasions.

The agency created a promotion that focused on three pillars: food, sport and party, with the heaviest emphasis on party. Every time a customer purchased a pack of Keystone Light, he got a completely self-contained Cornhole game to play, renamed “Canhole.” Once the perforated hole was punched out, players could toss crushed Keystone Light cans to play the game and enjoy hours of bro-ments.

As a cross-merchandising partner, MillerCoors chose Jack Link’s Beef Jerky, a high margin convenience store item that fit the target’s lifestyle and was available in virtually all the same convenience stores as MillerCoors. In addition, a virtual Canhole game was offered online where people could play against Keystone Light front man, Keith Stone or Sasquatch, the focus of Jack Link’s summer campaign. Special codes on 24-oz. single-serve cans of the beer brand allowed players to advance through the game.

The fun drove increases in total convenience store distribution by 0.7%, while May through August sales of the 24-oz. single serve cans jumped 28.1%. Online, consumers averaged 10 minutes playing the game with more than 3,900 can codes redeemed. 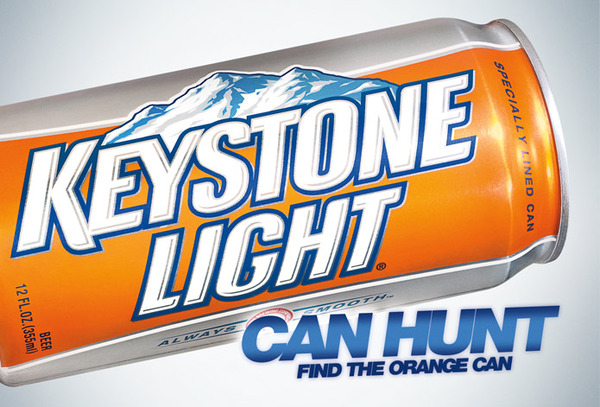 Keystone Light, a non-premium beer in the MillerCoors portfolio, needed to come up with a fall marketing program that would not only be self-executing and basically sell itself at retail (in case it didn’t get display space) but would also build on the brand’s equity as a source for “Smooth Solutions” for having a good time.

To give them the pleasure of hunting without all the work, Arc Worldwide and Leo Burnett created the “Can Hunt” campaign so non-serious hunters would have the excitement and pride that one normally gets from bagging the trophy “buck” by bagging the trophy “beer” instead. The theme of the Can Hunt was to “Find It. Mount It. Show It Off.”

The video shows how the campaign worked and gives performance metrics:

MillerCoors sent Keystone Light fans on a hunt for orange cans in random cases of Keystone Light. And to make the experience true to the hunt, the packaging – the box the beer came in – could be turned into one of four wall displays for mounting and showing off their prize can – a Keystotrout, Keystoduck, Keystoboar and a Keystolope. Mounts unique to each SKU drove them back to retail for more. 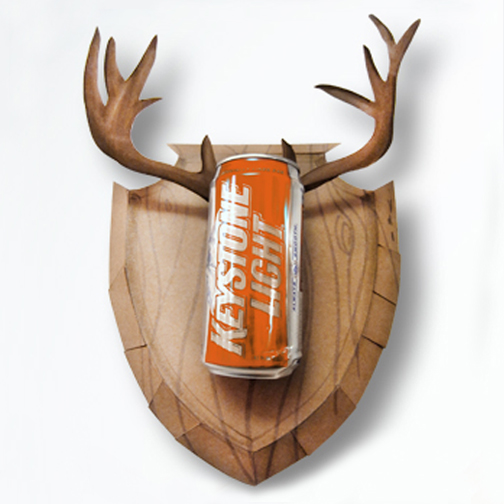 Thousands of orange cans (1 in every 4 packs) were randomly seeded in packs during the fall hunting season. The POS display broke through the usual hunting clutter with displays featuring the various mounts available in packs, as well as standees of brand icon Keith Stone showing off a larger than life orange can.

Successful hunters showed off their trophy cans on Facebook, which drove their friends to become can hunters. Keystone Light also sent Facebook messaging to its fans to get them to join the hunt. Keith Stone created his own online video about the orange can to further spread buzz. Consumers populated the Keystone Light Facebook page with "Can Hunt" success stories and their own color and “canimal” adaptations of the mounts. Some even tried to sell theirs on eBay.

Overall, "Can Hunt" drove 4,000 likes and nearly 6,000 additional Facebook interactions for the brand, while Keystone Light fans spread content to nearly a million of their friends. Despite tight budgets and brands fighting over limited retail space, POS orders exceeded forecasted numbers by 147%, which lead to a 500% increase in POS sales over MillerCoors projections. The promotion helped maintain a flat share of segment despite heavy discounting by competition.