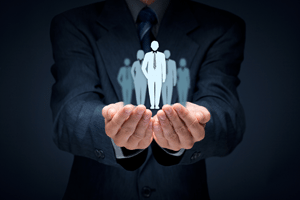 Nevertheless, what does micro-influencer mean and how can brands benefit? Though there isn’t a standard definition for the term (yet), I like how Forbes defines it, “More and more, brands are turning to people with far fewer numbers and followers—sometimes even as low as 8,000—to help them share their messages.”

Interestingly, 67% of marketers struggle most with finding relevant influencers, according to a TapInfluence and Altimeter study. On top of that, how do you find the right micro-influencer to represent your brand? Ahhh!

We’ll there’s a logical answer to that. The simple answer is, if there’s alignment between the influencer’s audience and the brand’s audience and you have data that suggests a high degree of relevance, you’re good. We’ve modeled this in what I like to call, “Pyramid of Influence.”

Naturally, marketers often gravitate to the top of the pyramid, that’s where celebrities live, like Beyonce or Lady Gaga. At the bottom, you have brand evangelists, typically, though, these people write reviews and provide ratings, but don’t have a significant level of influence except in their aggregate.

So why micro-influencers? Here’s some food for thought:

1. Authenticity Influencer marketing outperforms traditional digital advertising by 11X because consumers would rather hear from real people than brands. That’s advertising. As influencer marketing becomes more prevalent, consumers will continue to crave connection to more authentic experiences that only these influencers can deliver.
2. Millennials By 2020, Millennials will total more than $1.4 trillion in spending power. Millennial buyers are digital first, socially savvy and seek content personalized to their age, location and cultural interests.
3. Supply Even if celebrities and macro-influencers with massive followings were able to provide the intimacy that the close-knit communities of micro-influencers do, there simply aren’t enough of them. Micro-influencers are the biggest influencer category and cover millions of blogs, and YouTube has become saturated with popular vloggers making influencer marketing accessible to the masses.

It’s obviously important to monitor engagement. Celebrities have very significant followings and this weighs cost against what they can actually produce in engagement and, ultimately, sales. For example, a brand who paid Kim Kardashian to tweet saw her 15 million followers drive 1,200 website visits and it resulted in only 30 orders averaging $30 each. Those numbers are awful, but the related Cost Per Engagement (CPE) is equally terrible. Engagement, not reach, is one of the most important metrics.

As you get started with micro-influencers, keep these points mind:

• Engage 10 highly focused influencers, each with 10,000 followers, rather than a single influencer, with a diluted, varied audience of 100,000
• Use celebrity influencers strategically, for example working with celebrities to generate awareness and activate micro-influencers
• Take advantage of white space in your sector; influencers are currently underused by luxury brands, although their audiences take their “words as gospel, and this can translate directly to substantial profit for the luxury sector”
• Remember to look at CPE when evaluating value; micro-influencers will not always have lower rates than macro-influencers, however, they bring something different to the table

Promise Phelon is CEO at TapInfluence.

This article was first published in March 2017 and has been updated regularly.