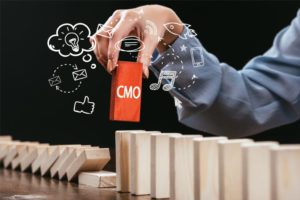 Whether it’s artificial intelligence (AI) making headway, over the top television (OTT) achieving critical mass or mobile platforms like TikTok growing like mad, technology is constantly causing tremors on the brand-marketing landscape. Where does this all leave chief marketing officers—professionals that often have come up through the ranks from creative or public relations departments?

For several months, persistent buzz has ensued about CMOs going the way of the dinosaur because of the increasing influence of data-fueled technologies. But data isn’t going to kill off the CMO. In fact, Coca-Cola just reversed its two-year-old decision to do away with its global CMO title by bringing it back and naming Manolo Arroyo for the role.

CMOs like Arroyo have more data than ever, and that data can now better measure ROI than ever before. If they understand the nature of their modern role, they can understand how an OOH ad, a streaming ad, a podcast ad or any other campaign actually affected sales.

After the last year—even with Coke’s U-turn—some may call my opinion counterintuitive. In 2019, McDonald’s and Johnson & Johnson ditched their CMO roles in favor of giving more power to titles like chief growth officer or chief customer officer. Due to the sheer magnitude of those historic brands, many an industry watcher said their moves were a death knell for the CMO. But CMOs can wrest that power back in 2020 if they change their mindsets about data. Data should, by now, be baked into the role of the CMO. Here are two mindsets that reveal a CMO today who is not only going to survive but thrive.

Value data-inspired masterstrokes as much as gut-level genius
Many CMOs have climbed the ladder of success thanks to creative, right-brain talents. But that mindset is from the past, and there are now many avenues for data-driven success for CMOs—and believe it or not, many routes drive straight toward creativity for TV, mobile and social media advertising.

For instance, Burger King, led by CMO Fernando Machado, a year ago combined creativity with mobile data for geo-conquesting efforts that epically trolled rival McDonald’s. The tag line, Whopper Detour, wouldn’t have been possible without the location data powering the effort, which offered consumers a Whopper for one penny whenever they were within 600 feet of a McDonald’s. The data-driven effort garnered Burger King a Cannes Lions Grand Prix award.

While Burger King offers inspiration for mobile marketers, the out-of-home (OOH) advertising space might be the most interesting application of the equation: data + creativity = success. There’s been a resurgence, if not a renaissance, in OOH, an $8 billion industry in the U.S. that’s expected to double by 2023. IKEA, under the direction of CMO Peter Wright, understands the strength that can be wielded when combining data intelligence with OOH creativity.

The home furnishing brand’s location in the London suburb of Greenwich, England, was opened with considerable fanfare because it was the most environmentally sustainable IKEA ever. Billboard ads in Greater London directed potential shoppers to the new store, encouraging them to take the most eco-friendly transportation—walking. The signage informed passersby of the approximate number of steps it would take to visit the IKEA from their location, and that statistic was accompanied by a large arrow, pointing them in the right direction. The OOH campaign garnered considerable attention from the ad world and provided the industry with another example of data-driven creativity.

Brian Czarny is CMO of Factual