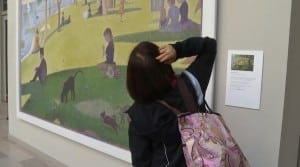 SILVER: Best Use of Event or Guerilla Marketing (Five or Less Venues)

Located outside the city’s theater district, the Chicago Shakespeare Theater is a small organization with an equally small budget. It thought a production of the Tony-winning musical Sunday in the Park with George, inspired by Georges Seurat’s iconic painting ASunday Afternoon on the Island of La Grande Jatte, could reverse its double-digit decline in attendance—but the theater had less than $10,000 to promote the show.

“We couldn’t afford any media support and very little production,” recalls Bill Reishtein, senior vice president, group creative director for Arc Worldwide, the agency for the promotion. “We needed an idea so unexpected and startling that the word would spread on its own via news coverage and social media. It was our only option!”

Fortunately Arc Worldwide/Leo Burnett did have onepriceless asset it could use: Seurat’s painting itself, one of the crown jewels of the Chicago Art Institute’s collection.

So on a busy Sunday, visitors to the museum came upon a version of Seurat’s painting identical to the original, except that central characters in the tableau were missing. As the crowd of confused attendees grew larger, those characters—or rather, actors from the Chicago Shakespeare Theater production who were playing those characters in the musical—appeared in the gallery to sing the show’s signature song, “Sunday.”

The most challenging aspect of that 45-minute “moment,” as Reishtein dubs it, wasn’t so much the production itself but the fact that it “would basically need to ‘broadcast itself’ to enough eyes and ears to make the program successful,” he says. “Plus, the entire end result would have to be driven by people’s reactions to the spectacle we created, and you never can be 100% in control of that.”

Nor can you control outside events elsewhere in the world—or as Shakespeare himself might have written, “The course of good marketing never did run smooth.” Because just as the promotion was beginning, “on the exact day of our event, at the exact time, the teachers union in Chicago called a news conference announcing they were going on strike,” Reishtein says. “This was the biggest local story of the year in Chicago—and our PR-driven event had to compete with it head to head.”

But as Shakespeare did write, “All’s well that ends well.” The sheer daring and unexpectedness of having the characters from Seurat’s painting come to life among the museum’s visitorsset attendees and the media buzzing.It helped that within three hours Arc Worldwide had distributed a multimedia news release, embedded with videos showing the production and viewers’ astounded reactions.The timing enabled the event to make the evening news broadcasts, among hundreds of other media, and enabled the localized, one-time-only performance to generate more than 8 million media impressions in one day—far more than the thousands, or maybe tens of thousands, that the agency and the theater had anticipated.

To further amplify the impact, Arc Worldwide texted a video trailer to museum visitors that they could instantly post on Facebook and other social media; to encourage sharing, one guest who posted the video would win a trip to Paris, the setting of the painting and the musical. The theater subsequently took the faux painting to an arts festival, where the 50,000 attendees were invited to “Picture Themselves in Seurat’s Masterpiece” and post their selfies with the picture online.

By attracting the attention of not just theatergoers but also cultural mavens at large, the theater had to extend the play’s run an extra seven nights to meet demand. Many of those ticket buyers were first-time attendees—the highest number received to date—at least some of whom are certain to make return visits and even become subscribers.

“The idea was so simple and telegraphic that, even with a minuscule budget, the word spread like wildfire,” Reishtein says. “The results—the increase in ticket sales and most-ever first-time guests—was achieved via the sheer power of an idea.”