The results are in. 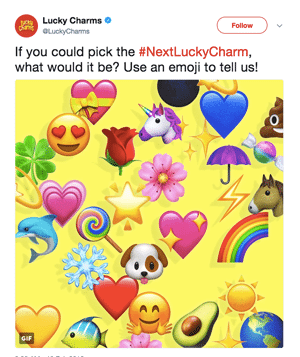 Lucky Charms ran a contest on Twitter using the hashtag #NextLuckyCharm to let consumers choose the next Lucky Charm marshmallow. Players voted by selecting from dozens of emojis that ranged from hearts to avocados to umbrellas.

The winner? A magical unicorn with a flowing purple mane and purple nose.

This is the first time in 10 years that General Mills has added a new marshmallow to its Lucky Charms cereal. The unicorn, however, is knocking out a fellow marshmallow, the hourglass, which has been a staple in the lineup of charms for more than a decade. Lucky Charms’ marshmallow blend features eight lucky charms including hearts, stars, horseshoes, clovers, blue moons, rainbows, red balloons and now the magical unicorns.

“We decided to introduce a new charm with the help of the keepers of magic themselves–kids,” says Josh DeWitt, marketing manager of Lucky Charms. “They spoke, and after hearing their love for the magical unicorn, we listened.”