Jägermeister is partnering with a sports-tech and media entertainment platform to launch a bracket-style soccer competition to engage U.S. soccer fans. 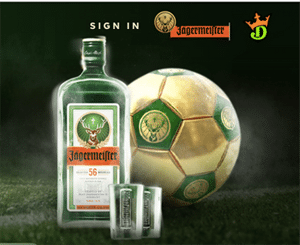 “The Real Shot,” played on the DraftKings’ platform, lets consumers adopt a team to cheer on throughout the international soccer tournament, the FIFA World Cup, which begins June 14. The Jägermeister sports marketing game is all the more poignant as the U.S. men’s team, mainstays of the World Cup for more than a generation, were knocked out last fall of this year’s World Cup in Russia. Jägermeister is hoping to heal the broken hearts of all those die-hard’s fans with a little fun and a reminder that the brand is the “unofficial shot” of the World Cup.

To play, participants pick a “Real Shot” team to win the tournament and then a winner for each of the 48 matches. Players accrue points based on DraftKings’ customized scoring system, which will appear in two leaderboards: “The Meister Leaderboard,” which includes all fans, and the “Community Leaderboard,” which includes all fans that selected the same team.

Players earn extra points by engaging with content on the DraftKings site throughout the competition. During the “knockout stage,” fans will pick a winning team for each game.

The top 500 “Meister Leaders” at the end of group play will receive Jägermeister branded prizes. The top five “Community Meisters” at the end of the tournament will win country-specific prizing from their community team and a Jägermeister branded jacket. The player that finishes the competition with the most points overall will be named “The Meister” and win the ultimate fan experience: an all-expenses-paid trip to the winning team’s country to celebrate victory like a local through a VIP soccer experience, including game tickets, transportation, swag and cash.

Jägermeister celebrates the sport through an integrated program that is supported across various channels, from on-and-off premise and point-of-sale to digital, influencers, social media, public relations and national TV.  Specifically, on-premise, The Real Shot program is amplified with premium soccer-related parties at participating accounts.  The accounts will feature Deer + Beer specials that pair Jägermeister with beers from participating countries playing in the tournament.

“We position Jägermeister as the unofficial shot of soccer fans in the U.S. and to promote that we implemented large-scale, custom-branded on-premise POS items like scoreboards, tabletop foosball games, tip buckets and fun giveaways. We want to enhance the experience both in-game and out-of-game,”Heather Kozera, vice president, integrated marketing and services, Mast-Jägermeister U.S., says.

Jägermeister, a German brand, first gained a footing with sports marketing in soccer back in 1973, when it convinced the German Football Association to replace the lion on the front of the “Eintracht Braunschweig” soccer team’s jersey with the Jägermeister stag during a home game. That partnership lasted through the end of 1986, Jägermeister said.