If it’s up to Hotels.com there will be a baby-making boom following the rush of the Super Bowl LIII. 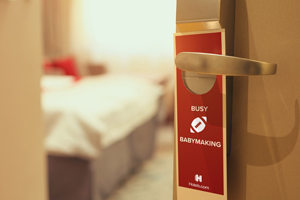 Fifty-three fans (for the 53rd Super Bowl) who root for the team that wins will get a free hotel room on game day, Feb. 3, to make a “Big Game baby.”

“This is our way of getting in on the game-day action. Whether fans grow their own team with a Big Game baby or just want to celebrate their team’s victory,” Katie Junod, general manager of Hotels.com, North America said.

Players enter the sweepstakes at www.BigGameBabies.com after the game ends and have 24 hours to enter for the chance to win the one-night hotel stay. Winners can then book a night at the hotel of their choice on Hotels.com and share news of the win using the hashtag #BigGameBabies, but “keep it PG-13 please,” Hotels.com cautions.

To add to the romance, the brand, who worked on the campaign with ICF Next, created a romantic playlist featuring 53 (for Super Bowl 53) jams to set the mood.

The sweeps is being actively promoted through PR and on the brand’s social media channels from now until Super Bowl Sunday, both on Twitter and Instagram, as well as live tweeting throughout the game.

As for how the brand will measure the results? “Despite our marketing team’s best efforts, winners will not be required to disclose if any babies were conceived as a result of the Big Game Babies contest; however, it would be awesome if they did,” the team said.

While plenty of brands have paid millions to air Super Bowl spots next month—Planter’s Peanuts, Mercedes Benz, Doritos, Olay among others—there are plenty of others who use the Super Bowl as a mega platform without spending a dime on an ad.

In lieu of a Super Bowl spot, Skittles will stage a play of its own, a one-night only Broadway show. The 30-minute show, performed in front of a live audience, will feature a yet-to-be-named celebrity at The Town Hall in New York City on Feb. 3 at 1 p.m.

Social networking app Bumble is running a Super Bowl spot, but it’s using the spot to kick off a year-long campaign starring Serena Williams. In the campaign, ”The Ball is in Her Court,” Williams encourages women to make the first move in all aspects of their lives,