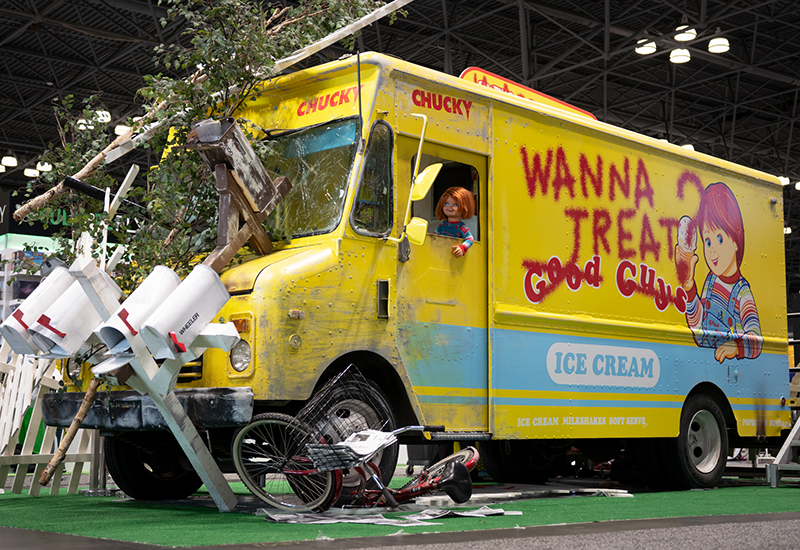 Though this year’s New York Comic Con wasn’t the largest it’s been in recent years, several brands delivered compelling activations nonetheless—from a creepy “Chucky” stunt by NBCU to a carnival-like experience supporting the HBO Max series “Doom Patrol” to an event-wide scavenger hunt from eBay. Following are brand experiences of note, according to a round-up in Event Marketer.

To promote its forthcoming horror series “Chucky,” NBCU created a stunt that included a bright yellow “I Scream” truck with the Chucky doll seated in the driver’s seat, campaign messaging graffitied across the vehicle, and props that the doll had seemingly destroyed after having stolen the vehicle.

HBO Max’s “Doom Patrol” activation featured a carnival-like experience with games and a circus feel, including an 18-foot-high big top tent, a slot car race, a personality test to indicate which of a show character’s 64 personas attendees most resemble, and a claw machine—all themed around the show’s plot line and characters.

eBay’s event-wide scavenger hunt challenged attendees to find 10 different display cases featuring different designs etched into their tops. Clues were purposefully vague—and more challenging as a result. The designs hinted at the figurines that players would win when they located the boxes, with the grand prize being an autographed and authenticated Stan Lee Collectibles series 2015 Comikaze Funko Pop! figure.

For more activations from this year’s New York Comic Con, read on in Event Marketer.