After a 2009 recall for Tylenol Rapid Release Gels, it was time to get the brand back in the market and mobile, combined with video, were the channels of choice. 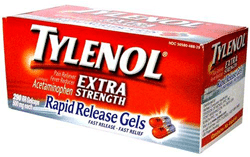 Shopper agency Upshot worked with the brand on an integrated campaign to get people into Walgreens—and hopefully purchase the product, AdExchanger wrote. Mobile ad platform Aki Technologies was brought on board to crunch data signals to pinpoint consumers in various trigger moments, such as running an errand, working out or within reach of a Walgreens store. It found strong engagement targeting consumers who had just worked out. Traffic app Waze was also tapped to direct consumers to the nearest Walgreens.

Once in stores, consumers found in-store messaging, including an end-cap video explaining how the Rapid Release Gels work. More than 2,500 stores featured the video and those stores saw a 9% to 10% lift in sales. The video also ran for 12 weeks on YouTube, the report said.

The U.S. digital video marketing industry is expected to reach $135 billion this year. In contrast, advertisers are expected to spend $83 billion on digital ads and $71 billion on TV commercials in the U.S. this year, according to a new report from Magisto.

“Advertising is no longer perceived as information, but rather as part of a growing slush of white noise. Video narrative offers businesses authentic and renewable currency, a way to create value in the attention economy,” the report said.

Interestingly, Generation X appears to be driving the video revolution.

“Done correctly, video has the scale of television, the precision of digital marketing and the power of authentic story. Businesses are using video to distribute their messages in ways that contribute real value to the attention economy and, as a result, is becoming a fiscal economy unto itself,” the report concluded.

Teaching the Masses What Bud Light is Really All About