Even when consumers go shopping by themselves, they’re not really alone. In their pocket or purse, they’ve got countless friends, followers and other resources ready to influence their buying decisions—or even give them an alternate shopping option to the store they are standing in. 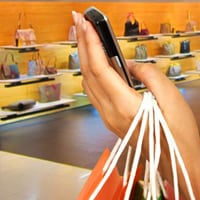 Consumer demand is driving the rapid growth in mobile and tablet commerce—and savvy retailers are realizing that they need to catch up, fast. But with less than 5% of their total web revenue currently coming from wireless devices, according to ComScore, most retailers are investing little in the channel. By 2016, however, an estimated $689 billion will be generated by mobile-influenced retail sales.

Of course, some retailers and brands are more advanced than others in driving mobile traffic both online and in-store with capabilities like payment options and barcode scanning. But, it is the risk takers and true trailblazers that are offering up innovative ideas to steal.

One striking example is a new retail concept for selling men’s jeans. Hointer in Seattle gives customers and their cell phones full control over the shopping experience. There are no stacks or racks of clothing, no salespeople to unlock dressing rooms, and no manikins. Customers walk into an understated retail environment displaying close to 150 styles of jeans hanging from their belt loops.

Customers download an app, scan the attached barcode of the jean they like, select a size—and the pants are waiting for them in one of six large fitting rooms. The clothing is delivered through a chute; and if another size is needed, the customer uses his smartphone to have it sent down the chute to the fitting room. Any unwanted clothing is dropped down the return chute and removed from the customer’s mobile shopping cart. Customers happy with their orders can simply scan their credit cards and walk out the door. The concept is aimed at men, who arguably dislike shopping, but is also popular with women.

Dr. Nadia Shouraboura, a former Amazon executive, is the marketing maven behind the concept, which could change the way people shop. She invested $10 million to launch the Seattle pilot store and has three more in the works.

“This store will appeal to anyone who wears clothes,” Shouraboura said during a broadcast interview.

On Yelp, people had lots of positive comments for Hointer, including Carol L., who posted, “The concept for this store is genius, the best of retail and online shopping combined. WHY DIDN’T ANYONE THINK OF THIS SOONER!”

In another example, Red Tomato Pizza in Dubai, had a very difficult challenge—finding a way to take pizza orders from customers speaking dozens of different languages. It dreamed up the VIP Fridge Magnet. Shaped like a pizza box, the magnet links to the Internet through the Bluetooth connection on a smartphone. When the lid is opened, the user pushes the “pizza” inside to place the order, which is preset online. A text message confirms the order, which is delivered in about 30 minutes.

Other marketers are going mobile around special times of the year. In the run-up to holidays, Hasbro optimized mobile sites around brands certain to be popular gifts, such as Transformers, Nerf, Ferbie and Playschool. The sites were designed with very specific purposes.

“We launched the sites for the second half of the year,” explains Victor Lee, vice president of digital brand marketing at Hasbro. “We built a mobile experience for people looking to research product information and then buy online through our retailers, like Walmart, or to use the store finder. If the consumer doesn’t have the information they are looking for after one click or swipe, they will abandon you.”

Hasbro uses paid search on Google, Yahoo and Bing, which provides analytics on search queries it uses to act on. “It’s cluster data, but it allows us to spend our marketing dollars wisely and have truly customized interactions based on people’s behaviors,” Lee says.

Mobile game apps are another tool Hasbro is using to boost sales. These games—sometimes tailored to adults, sometimes to kids to share with parents—often include a discount or offer tied to the game’s theme to drive the player (or the player’s mom or dad) to retail.

Already, some 52.4% of all U.S. smartphone owners have performed at least one mobile shopping activity while in a physical retail store, ranging from merely taking a photo of a product to actually making a purchase on their devices, according to Comscore.

Mobile ads show promise, too. Some 33% of U.S. smartphone owners recalled mobile ads while browsing the web or using apps on their phones at the end of 2012, according to Comscore. The group with the highest recall was 18- to 24-year-olds. Recalls begin to drop as the ages of the groups rose, with people aged 65+ recalling only 22.8% of the ads. The 18- to 24-year-old group is also more active in using their phones to participate in marketing and advertising related activities than is the average smartphone user. Close to 55% read posts from organizations, brands and events; 31.9% received a coupon, offer or deal; 33.1% saw an in-game ad; 29.4% clicked on an advertisement; and 21.2% scanned a QR code or barcode.

Walmart recently began using Pinterest to promote one of its most powerful new cause programs, Empowering Women Together. Research has shown that consumers are more likely to buy and be loyal to a brand that embraces a worthy cause. In March, Walmart linked its Pinterest page to a new section online for shoppers who want to buy unique and interesting products made by small, women-owned businesses around the world.

It’s a simple concept with widespread appeal, particularly among women, and features such stories as that of Joy Ndungutse and her sister, who founded Gayaya Links in Rwanda following the 1994 Genocide. The sisters organized 20 women weavers to earn money by selling their handmade goods; there is now a growing network of over 4,000 women. A person clicking on a pin, like the 12-inch Rwandan Basket from Gayaya Links, is taken to the site on Walmart.com, where he or she can make the purchase.

For brands like Betty Crocker, General Mills has worked hard to connect socially via concepts like how-to videos showing bakers how to create special cakes with themes ranging from pirates to princesses. When it first started in social, the company paid to place the videos online and then tapped bloggers. Today, those videos have a “huge” viral reach, says Pam Kermisch, BAA vice chair, integrated communications director-Big G cereals, General Mills.

“The idea that you might have to invest initially to feed it and grow it is very important,” she says, noting that the best strategy is not to think that people will search for a brand like Betty Crocker, but rather for a specific need.

“Most people are out there looking for solutions, and you need to find a way in social and mobile to give them what they need,” she says. “The strategy around using social can’t be about it being good for the brand—it has to be about bringing value to the consumer.”

General Mills’ Lucky Charms brand recently combined both mobile and social to go after adults who, in turns out, eat just as much of the sweet cereal as kids do. A mobile app was developed and launched on St. Patrick’s Day using augmented reality technology to let the user feel as if he or she were chasing and capturing the eight marshmallow charms found in every box of the cereal. 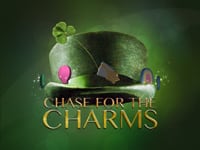 Players of “Chase for the Charms” who captured charms had the chance to win instant prizes, like a case of cereal, a T-shirt or the chance to be animated into a national Lucky Charms TV spot. Each charm captured also entered the player into a sweepstakes for a chance to win $10,000 worth of real gold.

“From a strategy standpoint, we wanted to remind adults how much they like Lucky Charms,” Kermisch says. “It’s fun, and at end of day it’s entertainment, but there is a business strategy and the sales were up by significant double digits.”

To promote the “Chase” to adults in social, Lucky Charms partnered with melodysheep to remix old Lucky Charms commercials and brand assets into a two-minute mashup music video that aired on Machinima, the YouTube network for gamers. Within days, the video had almost 900,000 views.

“This has been a whole experiment for us with adults, and it really surpassed our expectations—and, we’re working on our next iteration for next St. Patrick’s Day,” she says. “There is a lot of cool stuff in digital, mobile and social, but you need a clear business need.”

Social influence with the help of partner brands can lead to product innovations as well. Last year, live voting on Hasbro’s Monopoly Facebook page led to the ousting of the “iron” game piece in favor of the new “cat” in the “Save Your Token” promotion. Votes were cast from 185 countries, with the cat outpacing all other candidates by 31%. At every turn in the game, the brand reminded players to rush out to buy the Monopoly version that still included the iron, because it wouldn’t be on store shelves for much longer.

The game tokens on the chopping block—and the new contenders—didn’t go down without a fight. Partners in the social space drove interest in the campaign, as well as sales. Zappos and Nine West lobbied their social fans to “save the shoe” token. Duracell called for votes for the toy robot, Chevy and Hyundai for the car, Nine Lives for the cat, and Purina PRO for the Scotty dog. Tropicana lobbied to save the wheelbarrow, and Jolly Time and Hormel created a write-in campaign to create new tokens shaped like popcorn and bacon, respectively.

It also generated sales. In April, Hasbro reported first-quarter results that beat Wall Street expectations. It even called out the promotion in the report, saying the “games” category continued its positive momentum from year-end, posting 26% revenue growth in the first quarter 2013 over last year. Games that grew in the quarter included Monopoly, which was led by a “tremendously successful” global campaign to “Save Your Token,” the report said. Hasbro plans to launch new versions of “Save the Token.”

“This showed the social graph of when you have a good story what you can create,” Lee says.