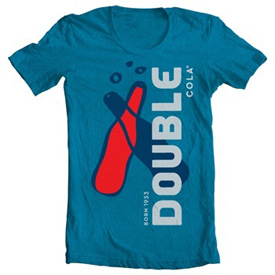 A loyalty program where soda drinkers can earn points and prizes in return for entering in codes from product packages is helping Double Cola compete with the big gulps in the soda aisle.

The Chattanooga, TN-based company—founded in 1922—has an international presence but in US is more typically sold east of the Mississippi, in states like Tennessee, Georgia, Alabama, Kentucky, Ohio and Indiana.

Double Cola has two main brands—the flagship product, which Gina McCommon, vice president, describes as having a "less bitter" taste than Coke or Pepsi, and Ski, a lemon and orange citrus product in the Mountain Dew genre that uses real fruit juices.

The family owned company—one of the owners is typically on the premises—produces its product in small batches, giving the soda a handcrafted feel that appeals to many customers, says McCommon.

The concentrate of the soda is sold to local bottlers, who then package it and sell it to distributors. Double Cola works closely with the distributors to create local promotions, but doesn't really focus on national ad spending, because it its regional presence.

In social media, the company maintains Twitter and Facebook presence for both the Double Cola and Ski brands. For the former, the focus has been on engagement and interacting with fans, while on the Ski Facebook page the onus has been on boosting the number of likes with efforts like rewarding fans with branded Ski gear when certain pinnacles are reached, says Megan Hallar, marketing coordinator.

"One of the important things to use is keeping the relationships we have and respond to our consumers online," says Hallar, noting that new Twitter followers are always welcomed with a reply. "We're very responsive on Twitter—anyone who tweets us, we want to tweet back."

The company's small size makes being responsive easier, says McCommon. "I've written to companies myself, and it takes a while to get a response—and when you do it might be automatically generated. We can do it quicker because we don't have to route messages through as many people to get to the right person [to respond]."

"Our consumers have a passion for the brand," says McCommon. "The neat thing about social media is that we're building a community so they can open up to us and talk to other people who love the product."

In June, Double Cola opened an online store, to sell the product to customers who can't buy the sodas in their local area. They weren't sure what the response would be, given that the product is so heavy so shipping would be costly.

"But people are willing to pay for the shipping, $60 in one case," says McCommon. "It's crazy, but it has really given us an awareness of our online audience's passion."

The "Reward My Thirst" loyalty program was started last November with the help of Online Rewards to reward that passion. The program, with about 1,200 enrollees, is admittedly only now picking up steam, considering the potential, says McCommon. "We're really now just getting around to promoting it via social media, and people are getting really excited about it."

Part of the slow start was that the codes were only on 20 oz. bottles of the soda. Codes are now being incorporated onto cans of Ski and Double Cola, after feedback from devotees of canned soda that they'd love to join the club if the codes were printed on those products as well.

While rewards like DVDs and jewelry are offered, the most popular items so far have been coupons for free soda or branded merchandise.

"What better way to advertise your love for a brand than by walking around wearing a Double Cola t-shirt or a Ski hat?" says McCommon.

The rewards program will bear both tangible and intangible fruit for the brand, says McCommon. Obviously, sales are a tangible benefit, and those are up from last year, she says.

A non-immediately financial benefit is the data collected during the registration process for the program. Through those questions, Double Cola is learning things like members favorite flavors, what types of stores they typically buy their soda at and what time of day they purchase.

The last question revealed that there are a good portion of consumers buying a bottle of Ski or Double Cola instead of picking up a coffee first thing each day. "It's their caffeine for the morning, says McCommon.