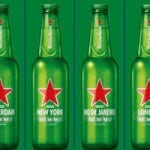 A campaign designed to position Heineken as the “Beer of Cities” helped the company improve brand consideration among Millennials, create social buzz and most importantly, increase the volume of beer sold.

The campaign, featuring beer bottles labeled with city names, was launched in 110 markets. It proved a conversation starter both in bars and for those buying to consumer at home; over a million of the city bottles were sold in just a few months.

“We wanted to do more about cities; the space felt right for Heineken,” said Esquer, noting it was an interesting contrast to the brands biggest competitor, which is heavily associated with the beach.

The overarching theme was to encourage people to be in the moment and high energy, and to enjoy life in their home cities to the fullest. To capitalize on this point, Heineken City Guides were created last summer and distributed through retailers and at events.

The brand also partnered with Foursquare and Instagram to learn what made each city tick, whether that was locales that encouraged healthy eating, rooftop restaurants or eateries that were BYOB. A guide was created within the Foursquare platform to deliver content to those consumers; usage could be tracked by location. Heineken worked with influencers in core markets on Instagram to engage the youngest group of target consumers, ages 21-29.

Heineken also partnered with big cities to participate in special events to enhance the cityscape, including an installation of lights last year on the San Francisco Bay Bridge and, more recently, a crowdfunding effort to restore Miami’s Marine Stadium.

Live from PROMONext: Chicken of the Sea Explores New Waters