KLM may be my new favorite airline. I’ve never flown them, but they have a loyalty program that upends all others.

Customers who fly intercontinental biz class are presented with a variety of little blue and white porcelain houses filled with booze prior to landing. They can choose whichever one they want to add to their collection. It’s a delight for customers and a physical reminder far beyond the KLM cabin as many people keep rows of them on shelves in their offices or homes as a kind if status symbol.

This week KLM celebrated its 100th birthday with the release of the 100th version of the so-called Delft Blue houses. Customers can track which houses they have and which to collect through an app.

“Every single house of a senior business executive in Holland has these somewhere,” Aaron Holmes, an American lawyer who formerly lived in Amsterdam, told New York Magazine.

In fact, 55 percent of consumers want personalized experiences from brands, but only 12 percent think their favorite brand executes personalization successfully. This indicates that brands are not effectively collecting or using data to successfully personalize experiences for customers, according to a new study from CrowdTwist. 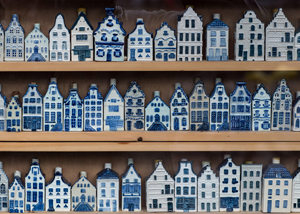 So with 62 percent of consumers saying they could be persuaded to choose one brand over another due to the presence of a loyalty program, do those neat little rows of blue and white houses sitting on office shelves move others to fly KLM? I’m persuaded.