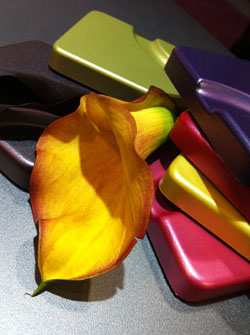 The company sells primarily to boutique industries like mass transit, aviation and medical device manufacturers, and typically has a 20- to 24-month sales cycle, says Ronn Cort, president of Kydex.

"Collaboration was a selling point for us," says Cort. "Designers didn't understand how we could color match and all the possibilities—we realized we could create inspiration in the design thought community."

Kydex was successful in their niche and successfully reaching the manufacturing and industrial side of their business. But when they began working with communications firm JPL about two and a half years ago, they saw a huge opportunity to evolve and get called into projects by designers earlier in the game. "They wanted to be something that was asked for by name," says Matt Kurowski, account director, strategic accounts, JPL.

The aircraft interior industry is a big vertical for the company. "Airline are very specific from a design perspective on what they want their seats to look and feel like, and Kydex wanted to evolve into being seen as very design-forward," says Kurowski.

While there are multiple levels in the design and purchase process, Cort notes that choosing a plastic for the core material in, say, an aircraft seat, is at the "beginning of the food chain." That's why it is important to connect with the designer, who is making recommendations early in the cycle.

In the past, much of Kydex's marketing was done at trade shows, supplemented by sales force interactions, international distributors and some print. "It was very feet on the ground, and they weren't utilizing interactive," Kurowski notes. 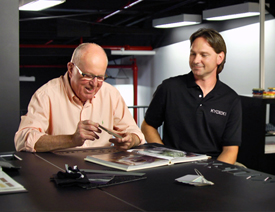 The company knew they needed to get someone who could help them speak to designers, both at live events and online. Enter New Zealander David Scott, an aircraft interior designer who had worked for several airlines. Kydex hired him to talk to designers at trade shows and be the company's "design guru."

"It was phenomenal to watch him interact with them," Kurowski says. "We realized that we needed to bottle that and deliver those trade show interactions to a broad but focused audience online."

JPL brought Scott into their studios and interviewed him to create several unscripted videos on design, which became the basis for Kydex's library of video content, which also includes customer case studies and features on new applications and industry innovations.

The result is that it has helped companies see Kydex as a partner in design, says Kurowski. For example, there was one potential client Kydex had been trying to connect with for 10 years, but never got beyond a few minutes of polite conversation ere and there. Within a few weeks of the videos going online, the client called Kydex to set up a meeting, and now they are a paying client.

Here's a sample of the 25-plus videos uploaded so far to Kydex's YouTube channel:

Kydex is pleased with the overall ROI stemming from the video efforts, says Cort. "Our goal was to write a million dollars in business  over a year starting in April and we're on track to write $700,000 by the end of August."

People who visit the Design Lab portion of Kydex's website  spend an average of four times the amount of time on the site as visitors who wandered into the site through the previous design front door. "We were blown away—people are spending 7 minutes on the site, watching two+ videos per visit and watching them from start to finish," says Kurowski.

In the Design Lab, visitors can also register to get a PDF of the new Kydex color palette, or request a color sample of the product. This registration process enables Kydex to collect information for future marketing.

People who register can opt-in to Kydex's enewsletter. Approximately 6,700 names are currently on the file, which is segmented by markets. Blasts are targeted to specific industries—for example, emails targeted to the aviation industry would include videos and news tailored to that specific vertical.

The enhanced design features has also led to a significant increase in mobile traffic to the site—mobile now comprises about 20% of overall site traffic, compared to 5% before the videos were posted. Much of the mobile traffic is  being driven by print advertising in publications like Aircraft Interiors International and Business Jet.

At present, Kydex has kept a low profile in social media. "If we go into that, we’ve got to be prepared, and we only have so many resources in our organization," says Cort.

One interesting challenge here is that while Kydex is a B2B business, there are many hobbyists and folks like law enforcement professionals who personally use the plastic to make things like holsters and knife sheathes.

The company is looking into the possibility of building up the side of the business to cater to these individuals, who currently buy the product in small quantities from resellers who cut large sheets down for amateur use.

Cort knows that if the company started going into social media on Twitter and Facebook full force, their first (and most vocal) participants would be the hobbyists, and they want to be prepared to engage with them properly.

"The hobby market builds our brand—it's only about 2% of our sales, but 98% of our brand recognition," he says. "When we step into the hobbyist arena, we want to thank them for their loyalty and patience."