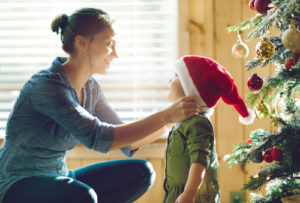 Millennials are now at the helm of the family dynamic. Nine in 10 new parents today are Millennials (ages 22-37), and this means that more and more, “talking to parents” means talking to Millennials–a cohort which is approaching parenting with a new lens, making new rules, taking on new roles and not necessarily following in the footsteps of the parents who came before them.

There once was a time when “parents were the boss,” but when Millennials were kids that was no longer the dynamic—Millennials were often the boss of their parents. The “baby on board” generation was their parents’ rising sun. The world was (and still is) obsessed with them (for good and bad).

But what happens when the “boss child” becomes the parent? They want to give their kids the same respect that they were given, but they don’t want to relinquish command. Enter a new family dynamic—”We’re in this thing together.”

Millennial parents are leading the charge on a different concept of “me time.” While 85% say they spend the majority of their free time with their kids, most still want to pursue their own passions, which means family time has taken on new meaning. When we ask Millennial parents about things that they do with their kids, 60 percent say, “I don’t only think about kid-specific activities.” In fact, 40 percent of dads say, “I have no problem with people bringing kids to bars.” (10 percent of Millennial moms agree…the rest think Dad’s lost his mind). Millennial parents want new experiences to fulfill them, but they’re bringing their kids along for the ride.

But is this constant togetherness all quality time? One needs only to walk into the closest restaurant and observe a young family of four, each on their own devices, sitting silently…to answer that question. Separate togetherness is a rampant phenomenon and an acceptable social dynamic from playgrounds to Silicon Valley corporations. Still, though Millennials have very much led the charge on this social dynamic, that doesn’t mean they feel good about it.

Millennial parents are extremely concerned about this “separate togetherness” and so, ironically, the original “digital natives” are becoming very “anti-digital” parents. They are seriously concerned about the dangers of digital disconnection and as a result are increasingly viewing TV as the “good screen.” TV has long been the screen that everybody loves to hate when it comes to evaluating the well-being of children, but in a world über-concerned with the isolation of digital, TV has a new, brighter face.

When we put a group of Millennial and Gen X moms into a conflict focus group setting, Gen X moms initially assume that Millennial moms just let their kids “get up to no good” online, because Millennials have always been so digitally driven themselves. But in deeper conversation we find the Gen X moms are actually much more lenient. They are more afraid that if they keep their kids off of certain apps and platforms, they will be out of touch – they’ll become losers. Millennial moms, on the other hand, have no concerns about giving digital a “big no.”

A Need for Family Programming that Connects and Entertains

This is a big parenting shift psychologically, which again is ironic as Millennials have often been credited with the demise of linear television. The “cord-cutting generation” is very pro-TV screen when it comes to their children. This opens the door to real opportunity for content producers, because while these parents are pro-television, they also have significant unmet needs when it comes to TV content that connects families. Three in four Millennial parents say that when watching TV with their kids, they usually watch kids shows that they don’t particularly enjoy. Everything is now so tailored to specific audiences, that “family TV” rarely lives up to the standards of the whole family.

Content tailored to kids is often a bummer for mom and dad. We hear a lot of, “We are watching Ninja Warrior—we love it.” But deeper discussion unveils that connection to these shows is more about the various members of the family being able to watch and enjoy in equal measure, than it is about a true love of the content.

In sum, the generation linked to the demise of TV now sees it as the good screen – but they’re underwhelmed by their options when it comes to family content. This presents a very real opportunity for brands and media producers that can produce a better product.

Pay attention to the new family dynamic. Millennial parents respond to messaging and concepts that stoke their own desire for new, personally fulfilling things, but they think it’s even better if junior can tag along. They crave experiences and content that broadens both their own horizons AND their children’s. They know first-hand about the dangers of digital addiction, and disconnection via over-connection. They want solutions and content to manage their concerns and to bring their family together, for real.