Travel + Leisure’s Twitter feed and activity is impressive. The page has more than 570,000 global followers, a number that grows at 3.6% per month.  In October, 766 tweets drew 14, 317 interactions with a potential reach of 14.2 million. Page views were impressive, topping 373,000 with more than 32,000 unique visitors. Even more impressive is the brand’s pages per visit number: 11.6. All this activity is generated from between 20 to 25 times per day. 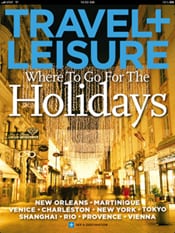 Peter Frank, the director of editorial product development for T+L, outlined 10 tactics and strategies the brand uses to harvest these impressive results. He spoke at min’s Social Media Boot Camp earlier this week in New York City and provided lots of real-time examples of how to make twitter produce to the max.

1. Think about what your audience is thinking about

Time of Day Matters: For example, at 12:33 PM on Nov. 12—lunchtime—a tweet was broadcast: “Eat spare ribs at a Texas BBQ pit or oysters on the half shell in NYC.” with a link to its article “America’s Best Places to Eat like a Local.” So whether followers were in Stockholm or Charleston they could read up on local places to eat that came highly recommended by T+L’s network of correspondents, chefs, critics and local experts.

At 7:32 am on Nov. 11, as followers may be packing for a trip, a tweet read: “How do you pack a suit? Here is a six-step packing method to keep your garb wrinkle free.”

Jump into the Trending Conversations: On Nov. 1, CNN was breaking news about a “multi-patient” incident at the Los Angeles airport. T+L tweeted its followers about the incident with a link to CNN’s article.

On a lighter note, another Tweet promoted that Baltimore’s National Aquarium was “wowing” visitors with its new $12.5 million shark exhibit.

Know Your Evergreens Play up content that you know has performed well and performs just as well on a cold January day as it does in the heat of summer like this tweet. “From the Amalfi Coast to Botswana, see if you’ve stayed in one of these 50 #TLWorldsBest hotels.”

“Don’t be afraid to tweet the same story more than once,” Frank said.

2. Tell your audience what to think about

Distract them from their day or announce holidays and anniversaries like this example: “The @Guggenheim opened to the public today in 1959. Happy 54th.” With a pic of the building overlaid with the words, “HAPPY BIRTHDAY TO ONE OF OUR FELLOW NEW YORKERS Travel+Leisure.”

3. Get their attention quickly and lead them like sheep

Start with a short question or sentence, like “How do you become a better traveler?” or “Drink in the Best of America!”  Explain what’s behind links in tweets: “Dominica has long been a secret Caribbean refuge for soul-searchers and beach seekers. See why.” And avoid hashtag overkill and test different locations for links, like in the middle of the tweet rather than always at the end, Frank said.

4. Let the picture tell the story

Sure T+L has a leg up on some brands with its access to beautiful images of food, resorts, scenery and famous landmarks, but using images in tweets can make your brand stand out, he said. 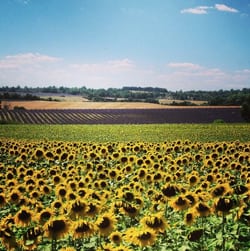 This image (right) appeared with the tweet: “It’s hard to not stop and smell the flowers in Provence.”  With a link to the T+L article, “World’s Greatest Dream Trips.”

Repurpose images from other platforms. T+L used an image of a beautiful natural arch-covered beach in Greece accompanied by the tweet,” #DailyDaydream! Wouldn’t Monday be better if you could spend it in Greece? More top beaches.” The same image and similar copy appeared on T+L’s Facebook and Google+ pages.

Resolve complaints by taking swift action. When one follower complained that ads popping up on the website were making it “impossible” to read an article because the ad covered the text and wouldn’t close. T+L quickly responded by acknowledging the complaint and tweeting that the issue had been passed along for the team to address.

Answer questions in a similar timely manner. Another follower asked for recommendations for places to stay and eat in Piemonte that received this response, “Sounds like a great trip! Our wine editor @bruceshoenfeld listed his fave Piedmont spots a few years ago” with a link to the information.

6. … and create a conversation

T+L holds weekly chats hosted by an editor for about 20 minutes. It chooses seasonal subjects or ties them to what’s appearing in print. The chats draw an average 202 participants who tweet an average 862 tweets. The chats get an average unique reach of more than 1.5 million.

Fill your panel with experts, brands and influencers. On held on Nov. 20 offered followers the opportunity to “Take your mind off the cold by joining our Warm Winter Getaways at 2pm today.”

7. Give followers the last word

Crowdsource, crowdsource, crowdsource.  T+L’s example was using an aerial photo of the neighborhoods surrounding the Colosseum in Rome. It added text boxes pointing to five fun or educational things to do right in that area suggested by friends and followers, like order the salmon tagliolini at the Hotel Forum and that the Basillica of San Clemente is more than just a church—it’s a fascinating voyage below ground and back in time. T+L asks followers to share their pics to beef up its Instagram photo library, where the photogs are sourced. T+L also rewards contributions with “Super-Short Travel Stories,” like the one pictured below. 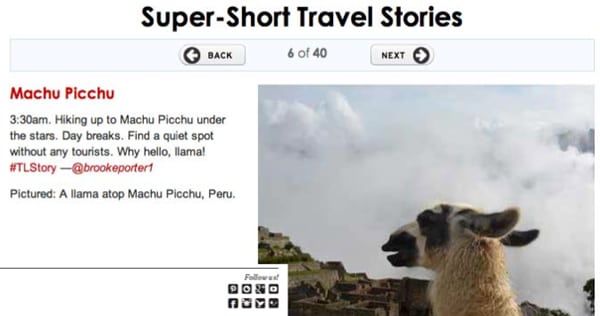 Solicit nominations like T+L did with this tweet, “What’s the best small town in the US? Tell us to nominate it to become one of America’s favorites & include #TLTowns!

And give them what they want, like the brand’s development of an article based on the tweet, “Forget the tourist sites. I want a romantic day with my husband in the City of Lights.” The half-page article born of that tweet outlined dinner aboard a private yacht, a hotel with rooms outfitted with damask silks and antiques and a restaurant set in a century-old space serving roast suckling lamb.

T+L engages “constantly” with its most important fans and maintains a list of its top influencers through a service available on Twitter.  It checks the activity on the list several times a day and retweets relevant content, like the recent tweet from @MarcusCooks that read, “Please RT – Help kids in the #Philippines affected by #Haiyan. Text RELIEF to 864233 to donate $10 to @unicefusa.”

“We constantly engage with these people, retweet their content and put them in the magazine,” Frank said.

Every medium is different and every social network is different so it’s important to reach each audience with relevant content. Here’s an example of how T+L and a partner used the same image and messaging updated for five different social platforms. 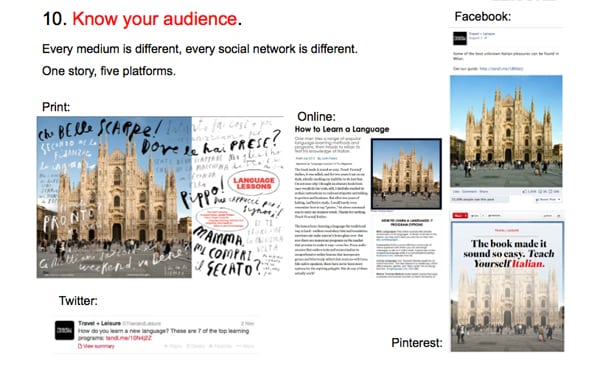 Watch what everyone else is doing,” Frank said. “And don’t be afraid to have fun.”