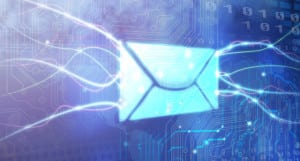 If you’re looking to make an impact with B2B email, don’t expect to break through with just one punch.

A strong series of messages, with clear calls to action and a sense of urgency, is the best way to connect with prospects.

What works in B2B email creative? Simple straightforward messages with a certain amount of urgency work well, says Harhut. Often, in a series, the third email with a “final notice” tone drives the message home.

Wilde recently worked with the American Medical Association’s resident physician insurance program, and created a series of emails for them. The third in the series performed the best, because it was most urgent. Simple, short copy with a strong call to action drove recipients to the landing page for more information.

“We didn’t cram too much information into each email,” she says. “Each message had a different angle, featuring different benefits, giving the reader cumulative knowledge. If they only opened one, they still got a good sense of the objective.”

The product being introduced in the AMA email series was disability insurance for medical residents. What was nice about it, says Harhut, was that they had a strong value proposition, highlighting what medical residents earn (not much) and they types of coverage residents qualified for typically.

The campaign, which also included some direct mail, resulted in a 614% lift over prior efforts targeting the same audience, with 60% of the traffic to the dedicated landing page coming in via mobile.

“There has to be a multi-touch component in email,” agrees Schwedelson. “You can’t email a single offer and expect the response rate you want. Send multiple messages that build on each other.”

“Companies pay lip service to the idea of segmentation and campaigns tailored to different personas, industries, etc. but then it comes time to execute, they often find they don’t have the content, or the customer knowledge, or even the resources, to deploy a multi-track campaign,” says Sewell. “So they default to a ‘one size fits all’ approach and email metrics suffer as a result.”

And Sewell laments that many B2B email marketers have become so slavish to the concept of data-driven marketing that the creative simply doesn’t get the care and feeding it deserves.

“Plainly put, there are a lot of really horrible emails out there,” he says. “I’m convinced that because many companies believe email creative isn’t that complicated, they just hand the task to anyone who can write 150 words. The result is emails that have no structure, no active voice, no empathy with the reader, sometimes no offer! And then the executives wonder why their campaigns don’t perform.”

“Email needs to inform, educate, entertain and then sell—this is still lacking in way too many emails,” says Grant Johnson, chief measurable marketing officer of B2B marketing agency Responsory. “They make it more about themselves than the prospect.”

Marketers need to focus more on testing and segmentation, he says, and they need to make sure one person or one team is managing the email process. If this type of management isn’t in place, customers could be getting 15 messages from your brand from multiple departments and your messages won’t be effective.

Johnson also notes that time can be a better indication of email effectiveness than open rate. “If they’re reading your message for two minutes, rather than two seconds, a prospect is intrigued and interested.”

Create an email product that people look forward to getting, Johnson suggests, and send it at the same time each week. Want to see if its working? Stop sending for a week or two and see if anyone notices.

“There’s not enough segmentation and data analysis being done—many marketers still treat B2B email as a mass distribution channel as opposed to something highly targetable,” he says.

In addition to urgency, the word “free” works in subject lines, as does personalization. The idea of exclusivity can also be effective, Schwedelson says. For example, try things like “just for CFOs” or “HR professionals only.”

“Delineate that you’re speaking to a specific audience only,” he says. “If its for everybody, you’re not going to open it up. But if it connotes its for a specific target audience, people will open.”

To really boost B2B email ROI, make the most of all the real estate available to you. While images are important in email, remember that your readers are using a variety of email platforms and not everyone will see those images. Linked text to take people to your landing page is essential, says Schwedelson. And when they get to that dedicated landing page, make sure it isn’t full of distractions. Keep the all to action clear, and front and center.

“I can’t tell you how much of a response killer it is if you have your standard site navigation on the email landing page,” he says.

Why Your Email Closing is As Important as Your Open Rate