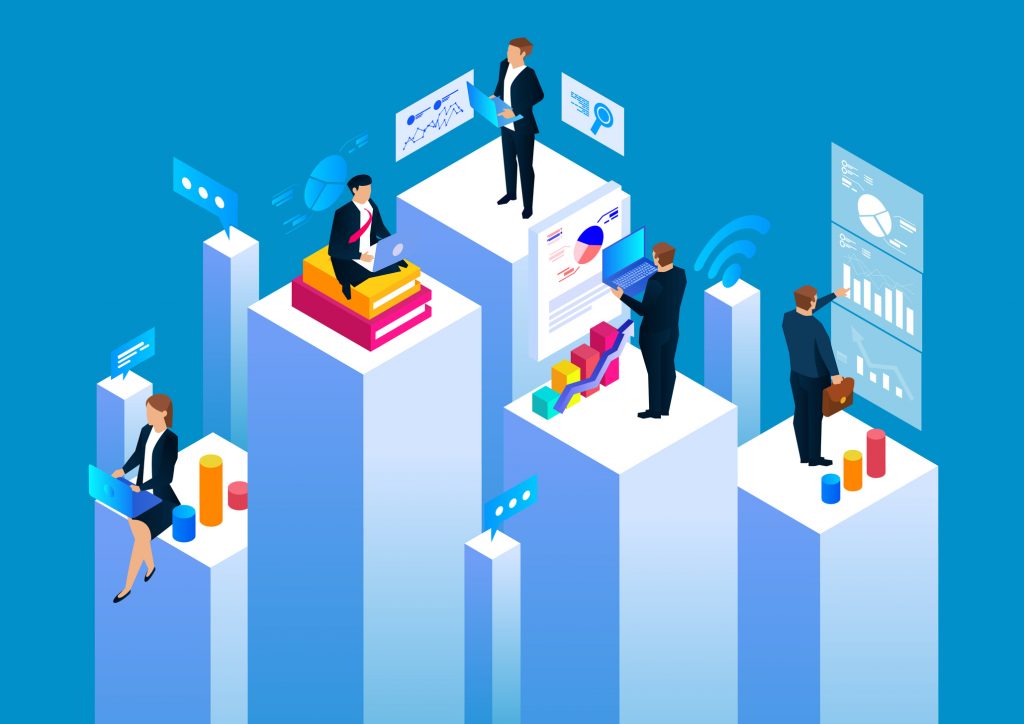 If your B2B organization hasn’t hired “hybrid” sales reps yet, it probably will be doing so soon—or risk falling behind the competition. That’s one of the key takeaways from McKinsey & Company’s report “Omnichannel in B2B Sales: The New Normal in a Year That Has Been Anything But.”

“Hybrid sellers are typically defined as reps that were previously ‘in-person by default’ but now sell with a fairly even mix of remote—mostly via video—and in-person, supplemented by phone or email as needed,” explains Rock Khanna, senior partner at McKinsey. Of the nearly 3,500 respondents to McKinsey’s February 2021 B2B Pulse survey, 28 percent said their organizations had hybrid reps in place, and 77 percent of those introduced this “specifically to address the surge in video/virtual selling due to COVID-19,” Khanna says. “The expectation is that this will be the number-one sales role very soon.”

That hybrid model extends to marketing as well. “Our previous research shows that the average B2B customer interacts with an organization through seven channels, and 20 percent use 10 or more,” says Liz Harrison, partner at McKinsey. “This means there is an even higher bar to craft, develop and activate effective marketing campaigns. This underscores the importance of properly harnessing your data assets in order to understand your audience across channels and drive more positive business outcomes.”

McKinsey found that just under one third of buyers prefer in-person meetings with sales reps—even now that the country is opening up again. That figure is consistent across all stages of the buying process: identifying and researching new suppliers, considering and evaluating new suppliers, ordering and reordering. Slightly more buyers favor what McKinsey calls “remote human interactions,” including video and phone calls, emails and texts. And digital self-serve was nearly as popular. In fact, when it came to reordering, it was the most popular option, with 36 percent of buyers preferring it, compared with 34 percent favoring remote human interactions and only 30 percent opting for in-person meetings.

B2B organizations are striving to give current and potential customers what they want. While 57 percent of such companies reported selling in person as of February 2021, only 15 percent expected traditional in-person meetings to be the rule going forward. “Essentially, what we’re looking at is the difference between in-person being an option versus it being the default,” Harrison says. “Even though the majority of companies are still selling in person, and will continue to do so as part of their omnichannel go-to-market, compared to their pre-COVID-19 model, they won’t choose for every interaction—be it with customers or internal—to be in-person.” 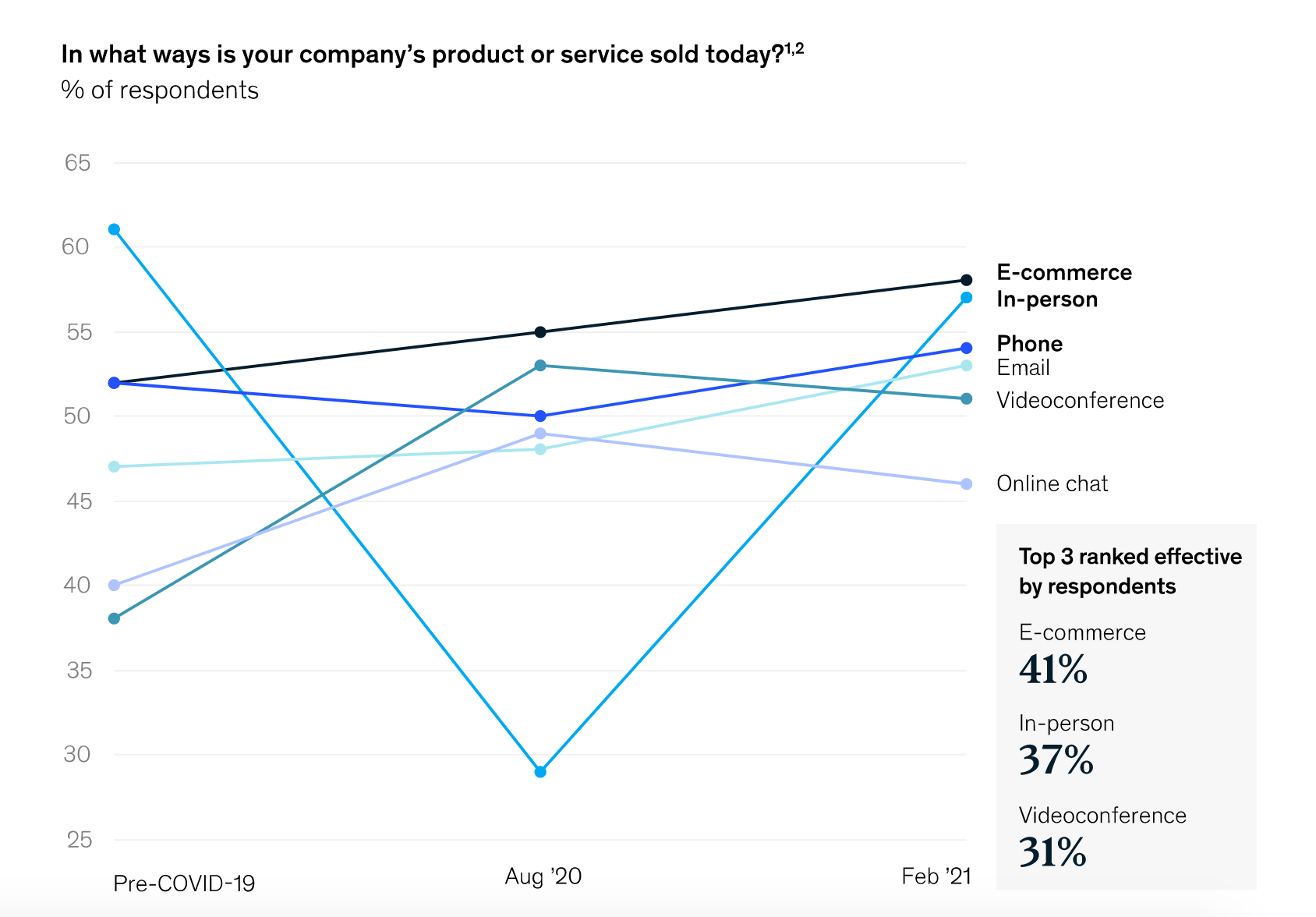 That’s one more reason that companies need to have a data-based 360-degree view of the customer. “A foundational customer data set must exist inside an organization, with the goal of having a unified view of the customer across channels,” Harrison says. “Investments in data and technology will ultimately augment personalized marketing in an omnichannel environment.”

Fortunately for B2B companies, the omnichannel approach works. Of those surveyed in February, 58 percent said the hybrid sales approach was somewhat or much more effective when reaching and serving existing customers than “in-person by default” selling. In comparison, only 17 percent judged it somewhat or less effective. Effectiveness ratings when it came to new customers were similar: 60 percent of the B2B organizations surveyed said omnichannel selling was somewhat or much more effective, with 16 percent citing it as somewhat or less effective.

Another way to look at this is by channel. Forty-one percent of the B2B survey respondents ranked ecommerce as effective, making it the most highly rated sales channel. In-person meetings came in second place, with 37 percent rating them effective, followed by videoconferences (31 percent considered them effective).

Transitioning a B2B sales organization from the traditional in-person model to a hybrid model has its challenges, of course. Two-thirds of the B2B respondents said their sales teams have experienced channel conflicts—for instance, sales reps losing commissions because customers are purchasing via the website.

“Organizations should consider a way to figure out a role for sales reps to play in advocating ecommerce and incentivize them for that role,” Harrison says. “One example could be to pay reps a percentage commission on ecommerce sales for customers in their territory, compared to a slightly higher commission they may earn for traditional sales. Also, organizations should work closely with reps to ensure they play a role in follow-up services—delivery, onboarding, service check-ins—as it is incredibly rare that 100 percent of B2B customer needs can be handled via digital alone. Finally, organizations should provide guidance to reps on where they can and should add value—for example, advising where reps should be involved in certain types of customer interactions and which types should go to self-serve.”