There is a large and growing group of consumers who are figuring out how to live the lifestyle they want, but doing so on a budget. This group is learning to seek out value deals that don’t compromise their standard of living. It’s not about being cheap. It’s about making a dollar go farther and, even more importantly, freeing up more money to enjoy other important things in life. 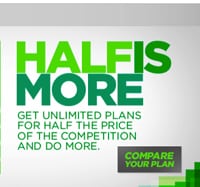 Prepaid cell phone company Cricket, focused in on that key insight it learned from both internal and external research and wrapped it around messaging in a new campaign tagged, “Half Is More.” The campaign takes direct and aggressive aim at wireless giants Verizon and AT&T, calling them out for being way overpriced and for consumers to ask themselves why they are spending more for the same services they could get with Cricket for about half the price.

“The main reason we’re going after AT&T and Verizon nationwide is that they are the leaders with almost 200 million subscribers on those two networks alone. Cricket nationwide has about 5 million subscribers,” Deborah Jourdan, senior director of marketing at Cricket, said. “The whole idea it to help people realize they are being overcharged for their wireless by AT&T and Verizon.”

The multi-channel campaign, headed by retail marketing agency TPN, is directly aimed at the estimated 51 million consumers considering switching providers and looking for a better deal on wireless but who are not willing to compromise on great devices and service.

“What we learned was that people are being locked into expensive rate plans and that a lot of people are open to the idea of shifting away from a contract carrier to a non-contract carrier,” Sarah Cunningham, TPN senior vice president, client service for Cricket, said. “We know that two-thirds of the people looking will be coming from the two biggest players in the space: Verizon and AT&T. For cricket it’s really about challenging the status quo.”

“Half Is More” rolls out this month across digital (banners and search), online video (a first for Cricket) print, retail P-O-P, out-of-home, social media, an in-progress refreshed Cricket.com, Hispanic marketing from Alma DDB, cinema pre-rolls and television by PHD that began June 3 and will run throughout the remainder of the year. One video shows guy selling burgers from a truck asking customers if they would like to pay $5 or $10 for the same burger.

While this may be a serious strategy for Cricket, the “Half Is More” campaign offers a humorous take on switching wireless carriers—as evidenced by the input from independent writers and producers from Chicago’s improv community—while at the same time focusing on affordability.

“Even though economic indicators were starting to be more positive, the target continues to feel squeezed, their disposable income is down and every expense is being scrutinized,” Cunningham said. “As you can imagine people are pretty skeptical, people believe that if you pay less you have to make compromises.”

Insights for the language in the campaign messaging came from a combination of comprehensive external quantitative research focused on the path to purchase, awareness at purchase and recommendations to others, and qualitative research with focus groups. Cricket employees, including Jourdan, working to convince their friends and family to switch to Cricket, also played a role in developing the appropriate messages.

On a local level, Cricket, which just announced the addition of the Samsung GS4 to its line-up of smartphones, operates nearly 2,000 retail locations that are activating promotions against the “Half Is More” message. Some local retailers have full rein in running unique promotions like sponsoring local events or neighborhood festivals or something much more simple like laying out two of the same candy bars and asking customers whether they would buy one for half the price of the other.

In social media, posts of Facebook and Twitter are designed to keep up a conversation. The content is edited and served based on consumer questions and what’s trending in social based on the campaign. Content is also being provided to influencers and brand advocates. Zocalo is working with TPN on social media and word of mouth.

Leading indicators of the effectiveness of the campaign are in online and social media.

“The online videos, running for a few weeks, are meeting expectations from click through and video completion rates and there has been positive feedback on social channels including regular sharing of the content,” Jourdan said. “Ultimately our marketing mix model will be results in ROI and in driving new customers.”

“Half Is More” follows the “Your Call” campaign, which began in 2010 under TPN, Cricket’s agency of record. “Your Call” served up the facts about Cricket’s value proposition and let the consumer make the call.

“ ‘Half Is More’ is a more direct and aggressive against our competition,” Jourdan said.