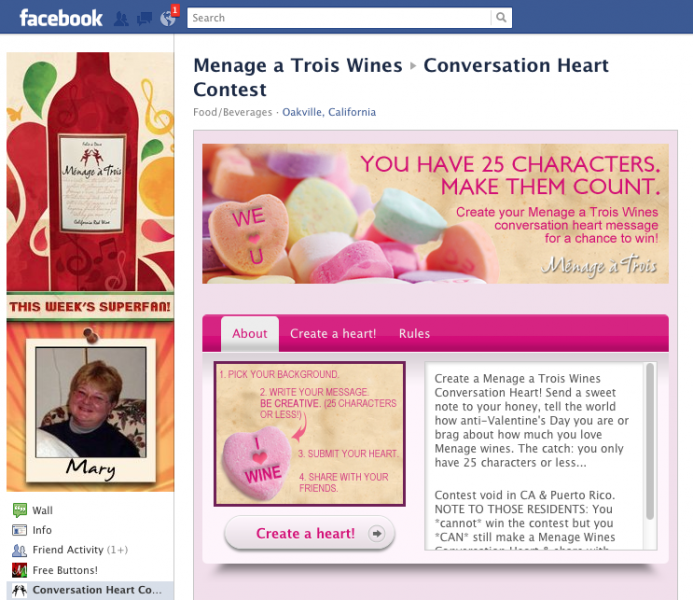 A Valentine’s Day promotion inviting fans to create “Conversation Hearts” is the latest in a series of Facebook campaigns by Ménage a Trois designed to create buzz for the wine.

The Ménage a Trois brand, owned by Trinchero Family Estates, gets its name from the fact that its wines are a blend of three different grapes. Over two million cases are sold by the brand annually.

Much of the marketing for Ménage a Trois is accomplished by word of mouth, bolstered by the brand’s intentionally provocative name. Point-of-purchase displays in liquor stores, particularly around the holidays, also support the wine, as do banner ads and select print hitting targeted demographic niches, such as a recent ad in The Source magazine.

Last year, the brand began working with Social Candy to create targeted social promotions to generate fans, followers and buzz for the wine. Using Social Candy’s customizable Collage application, last summer the brand got over 17,000 new fans with a promotion inviting them to create a poster for Ménage. Fans were then invited to vote on their favorites, which had to incorporate elements like wine bottles, logos, silhouettes of musical instruments and other artistic images.

The Collage application is being used currently for a Valentine’s Day promotion centered around “Conversation Hearts,” where users can customize a message for a loved one.

Internally, Ménage judges the success of social media promotions by the number of new fans generated, as well as page engagement and how many people share content. “We’re really user generated content focused, because Ménage fans really like to talk about each other and themselves,” says Megan Steffen, social media marketing manager of Trencher Family Estates.

The brand averages about 3,000 new likes per promotion, and as of February 13 was up over 35,600 likes on Facebook. Some of the promotions go on for about two weeks, while more complex ones like the poster content can go for up to six weeks.

Megan admits that the brand is still working on how to tie the social metric into actual wine sales. For the future, Ménage is looking at how it can take advantage of the emails addresses it has captured through the various promotions, to further engage wine drinkers. “There’s an opportunity to step it up,” she says. “We want to drive people to the Facebook page and our website with email.

One opportunity that isn’t so easy to capitalize on because of legal restrictions is linking to retailers who sell Ménage products on social media sites.

“One of the biggest challenges is the legal concerns,” says Darrin Kotalik, CEO of Social Candy. “For example, people in California can’t enter contests from alcoholic beverage companies. So obviously, legal issues and logistics are barriers.”

Possibly the biggest lesson for marketers, he says, is to make it fun.

“There’s still a learning curve for a lot of people in social media,” Kotalik says. “But once you remove the technical barriers, the engagement opportunity is huge.”