Recently, Piper Jaffray Cos., an investment bank and asset management firm, said virtual reality will be the “next mega tech theme” and grow into a market worth $60 billion in 10 years.

If marketers want to take advantage of this game-changing technology, they should take notice now. Here’s some interesting examples of companies using VR as a marketing tool.

One of the major marketing uses of virtual reality is to provide customers with experiences that will convince them to physically visit a location or event. Not all brands, however, have physical locations or events to market. In these cases, virtual reality can be used to market a lifestyle.

Earlier this year North Face unveiled virtual reality experiences in its Manhattan store. Viewers were able to experience hiking, rock-climbing and base-jumping through virtual reality. The goal was to excite shoppers about the outdoors, and then for them to use the company’s gear on their next adventure.

In June, Zumba released a 360-degree virtual reality exercise video led by company co-founder Alberto Perez. The video shows Perez leading a three-and-a-half-minute class, and was shot in a way that allows viewers to either participate in the routine or mimic what it’s like to teach a class. With the release of the virtual reality experience, Zumba can market to both first-timers and those interested in becoming instructors.

“VR is a great way to show people what the Zumba experience is like,” Alberto Perlman, CEO of Zumba told Fortune. “A lot of people don’t know what it’s like to be in a Zumba class, and you can only see so much in 2D.”

Savannah College of Art and Design

Colleges and universities have been among the earliest adopters of virtual reality, and are using this new tech to reach and engage with prospective students. The Savannah College of Art and Design (SCAD) is at the forefront of this push. This spring, SCAD mailed 5,000 inexpensive, branded virtual reality headsets to students who were accepted into the school, but had not yet enrolled. SCAD’s hope was that students would use the virtual reality headsets to explore its campuses and picture what it would be like to attend the school.

“Once I put [the virtual reality headset] on, I was obsessed with them for about two weeks,” a prospective student said at a recent SCAD event. “All my friends tried them, and it was great how you could see different rooms. You really got to experience SCAD when you weren’t really there.”

The school has plans to expand its program by sending headsets to targeted high schools and teachers, as well as to create virtual reality experiences of university exhibitions and events.

Embry-Riddle Aeronautical University in Daytona Beach, FL is also among the growing list of colleges and universities utilizing virtual reality, though the school is using a different method than SCAD. While SCAD mailed students headsets, Embry-Riddle has outfitted some of its admissions professionals with virtual reality headsets, so they can engage prospective students at recruitment event at high school and colleges fairs.

Because the technology is so new, Embry-Riddle and other schools are drawing large crowds of perspective students, who want to experience virtual reality—whether or not they may have initially been interested in the university. This leads to more one-on-one interactions and opportunities for the admissions professionals to educate students about their school. 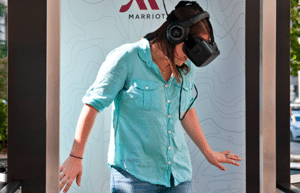 Last summer, Marriott rolled out its own virtual reality experiences as part of its “Travel Brilliantly” campaign. For one aspect of the campaign, Marriott built large booths, dubbed “Teleporters,” that transported viewers into virtual reality versions of London and Hawaii. In addition to virtually experiencing a location, the company enhanced the experience by adding heat and mist.

Michael Dail, vice president of Marriott Hotels brand marketing, told Wired his company hopes people will become inspired by the experience and decide to book a trip. He added that another goal of the campaign was to help the hotel group build credibility with younger, often more tech-savvy, travelers. 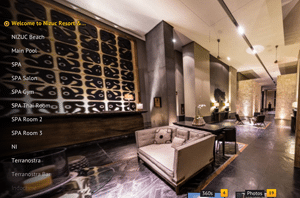 Steven Kadoch, a managing partner at UJV, said he immediately saw virtual reality’s potential as a sales tool and “innovative way to present hotels to clients.”

“We’re constantly looking for tools and ideas that can help our travel partners sell themselves better,” Kadoch said. “By using this technology, we have improved our relationship with several of our hotel partners by providing them with virtual reality tours of their properties.”

Using virtual reality, hotels can allow potential guests to step inside and experience their properties before they commit to booking.

Thomas Cook, a global travel company, is using virtual reality in two ways. The tour operator has placed Samsung Gear VR headsets in 10 of its brick-and-mortar stores in the United Kingdom, Germany, and Belgium. Customers can experience standing on a balcony of a Santorini hotel and a helicopter ride above Manhattan. Additionally, by August the company is expected to mail 5,000 brochures and cardboard headsets to potential customers, a tactic that is growing increasingly popular

Peter Frankhauser, the company’s CEO, said at a recent shareholders meeting that he believes the technology will eventually take off on a mass scale.

“We believe that as (virtual reality) becomes more widespread, we will be well positioned to deliver 3D hotel and destination experiences via our website to customers in their homes,” Frankhauser said.

After they’ve created the virtual reality experiences, real estate agents have the option of giving clients an inexpensive virtual reality headset, so they can tour property from anywhere; agents might also invite clients to their offices to view many properties at once in order to whittle down their list of potential spaces.

TomorrowWorld used the experience to market the entire festival in hopes of wooing potential concertgoers with an immersive experience that emulated being there.

Last year, HBO partnered with Framestore and Relavent to create a virtual reality experience to help market the mega-hit “Game of Thrones.” Using an Oculus Rift, wind machines, rumble packs and real elevators, the companies built an experience that allowed users to enter an elevator that ascended “The Wall,” a massive ice structure that’s one of the TV show’s major locations.

According to Adweek, Birchbox doesn’t have plans to create more VR content, but it is uniquely positioned to do so, as a large percentage of its subscribers will have a VR headset going forward.

Abi Mandelbaum is co-founder and CEO of YouVisit.