It’s never a good thing to take yourself too seriously. Content Marketing World made sure that attendees had a chance to laugh, with keynotes by John Cleese and Nick Offerman.

Cleese had never been in Cleveland before, and wasn’t exactly impressed. “Here I am in this dump,” he said, looking around the cavernous keynote hall dubiously. “It’s like being in a submarine storage space.”

He later remarked about the city that “the amazing thing isn’t that Cleveland exists but that people live here,” drawing laughs from the crowd but a few groans from some locals.

Offerman seemed more receptive to the city’s charms, quite possibly because Content Marketing World founder Joe Pulizzi presented him with a glass of local craft beer and some bacon—lots of bacon—at the start of their on-stage interview. While Offerman is very different from his “Parks and Recreation” character Ron Swanson, he does share a love of red meat with his alter ego and was clearly delighted, snacking on the bacon throughout the chat.

Both comedians were amused at the concept of “content marketing.”

“All of you are con-tent marketeers,” said Cleese dryly. “I don’t know what makes a marketeer content—I don’t want to make you discontent.”

For his part, Offerman said that he wasn’t sure his particular style of content would be easy to market. He noted that while he has many friends who are brilliant at writing jokes, he’s more of a storyteller. “Think a less educated, more foul mouthed Garrison Keillor,” he laughed. “Know your niche.”

It will serve you well to know what you’re good at—everyone is good at making something, he said, be it stories or food or skyscrapers.

He sees his particular off-center worldview as one of his greatest assets. Offerman said he realized long ago it was in his best interest to “stick to the weird, because the one out of 10 who likes what you do [and wants to work with you] will be doing the good stuff.”

Cleese encouraged attendees to embrace their “intelligent unconscious,” and give their mind time to wander and play. This will encourage creativity, he said, noting that knowing how to play is something creative people have in common with children.

“When you have a decision to make the only thing you need to know is when that decision has to be made,” Cleese implored, citing “Hare Brained Tortoise Mind: How Intelligence Increases As You Think Less” by Guy Claxton as a must read.

Don’t rush; give yourself time to think, said Cleese, suggesting that people create a safe space for their tortoise mind to wander, away from distractions with boundaries of space and time from the “real life.” This could be as simple as going to the park to get away from the phone and your coworkers.

On the topic of coworkers, Cleese noted that great teams have diversity. They’ll argue more if everyone comes from a different place. While Cleese himself is very disciplined, his Monty Python colleague the late Graham Chapman was a bit different.

“Graham was a lazy bugger but every once in a while he’d say something that would set us off in a different direction,” inspiring great comedy, he said.

The topic of U.S. politics drove Cleese to remark that the world was “completely hopeless.”

“I mean….Donald Trump? [face palm] The mind reels,” the British comedian said. “It’s not that ours are any better, it’s just that they’re a little less awful.”

The closest Offerman got to politics was noting that he’d like to get into a fistfight with same-sex marriage license foe Kim Davis. The reaction from the audience suggested that they’d have his back in such a scrap.

Offerman’s silly giggle, especially whenever he said something risqué about his wife of 15 years, actress Megan Mullally, generated tons of endearing comments from attendees on Twitter. He began his talk by singing a song he wrote as a gift for her 50th birthday, “The Rainbow Song.” It was very sweet, and more than a little off-color. (Listen to a version of it here that is much more safe for work than the one he sang for CMW attendees.)

In other musical notes, the Barenaked Ladies performed a concert for attendees Wednesday night, and got not surprisingly got in on the levity as well. Lead singer Ed Robertson sang a rap about content marketing, and offered up the band’s services to write jingles, riffing off an example of what they could do for, say, cream to smooth out your feet.

Considering the band wrote the “Big Bang Theory” theme, it isn’t surprising that they’d be geeky enough to get the concept of content marketing. He noted that their particular brand had been successful for many years, even though the content didn’t exactly live up to their name. (All the band’s members are male and tend to stay fully clothed during performances.) 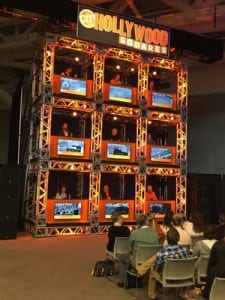 Marketers also got in on the comedy act too. For the two main days of the event, each day eight speakers played a round of “Hollywood Squares” in the exhibit hall, in a recreation of the set from the old game show. Travis Wright, who will be a featured speaker at Chief Marketer’s IM+T Summit next month, did his best to channel Peter Marshall as host of the game.