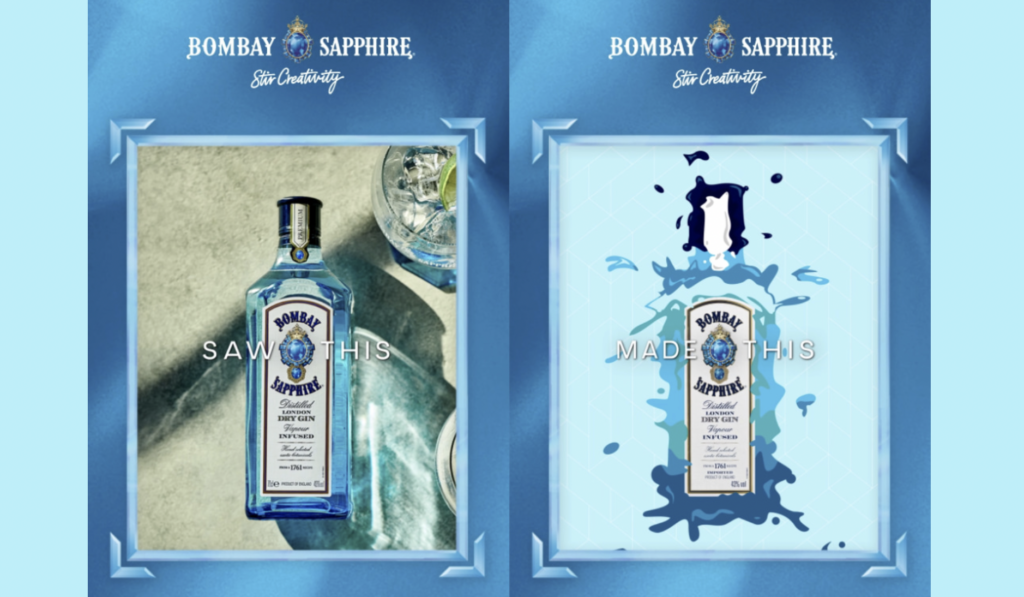 Bombay Sapphire has tapped filmmaker Baz Luhrmann as creative director and star of its new global campaign “Saw This, Made This,” which invites consumers to view the world through a creative lens, capture what inspires them and then share their own works of art on social media with the hashtag #SawThisMadeThis. We spoke with Bombay Sapphire Global Vice President Natasha Curtin about how the campaign ties into the brand’s “stir creativity” mission, leverages local bartenders to help spread the word and how the company plans to illuminate the initiative’s best work.

Chief Marketer: What was the inspiration behind the campaign? How did you come to work with Baz Luhrmann?

Bombay Sapphire Global Vice President Natasha Curtin: It started from this shared belief that Bombay Sapphire and Baz have, this view that anyone can be creative. And in fact, anywhere and anything can be creative. It’s just about reframing how you look at the world around you. That’s the essence of the campaign. #SawThisMadeThis is about an encouragement, a call to arms, for people to go out into the world, see something that creatively inspires them and make something.

What we found so exciting was hearing Baz [talk about his] deep commitment to giving back to creative communities. He talked to us about how he’d come from very humble, small town beginnings in Australia and how he’d taken the everyday, the ordinary, and turned it into something extraordinary.

CM: What kinds of submissions are you expecting to get? Have you given people any creative direction?

NC: The campaign invites people to go out and capture and share what they’ve seen in the world that inspires them, and then what they’ve subsequently made, photographed, cooked, drank. We’re seeing this coming through in interesting forms–painting, architecture, makeup, cocktail, cookery. We’ve begun a call out to some of the world’s best bartenders that we’ve worked with who have taken this notion of “Saw This Made This” from the cities where they work. A U.S. example is Julia Momosé who works in Kumiko Bar in Chicago. She was inspired by a scene on her way to work and she’s made an exquisite structural cocktail, a spirit that’s inspired by that. And then also Valentino Longo of the ShoShin Arts Club in Miami. He’s played with a sunset over one of the beautiful art deco buildings in Miami South Beach and turned that into this exquisite cocktail.

CM: The campaign culminates with a showcase of people’s submissions in partnership with various museums. How will that selection process work?

NC: We wanted to make sure that we also had somewhere to celebrate all the creativity that we see, so there will be a creative gallery running on our social media channels. And Baz Lurhmann will help us create some selections. We’re also working with our partners, the Design Museum in London, who we’ve had a longstanding partnership with, to showcase some of the wonderful things. We’ve also got a partnership with the Academy of Arts in Berlin and a Design Museum in Milan to have a real-life showcase. We’re also in talks now in New York about having a cultural proofpoint of all of these demonstrations. And this is going to culminate our around World Creativity Day, which is April 21st, next year.

CM: How are you hoping the campaign will attract new consumers to your brand?

NC: With “Saw This Made This” we’ve been able to hand the cocktail creativity back to people who’ve been playing with our liquid for many years and making incredible creative cocktails and expressions of it. This is also a way that we’re able to talk about our sustainably-sourced botanicals and our vapor infusion gin, and then how it can be a canvas for cocktail creativity. It’s a platform for people to do what they’ve been doing with the brand for many years, whether it be a twist on a Negroni, or how they’re personalizing their gin and tonics. Or, take what you see in the world and then use our liquid for your own inspiration–and show what you do with it. I’m sure we’ll speak to many loyal Bombay Sapphire drinkers, but also bring some new people along with us.