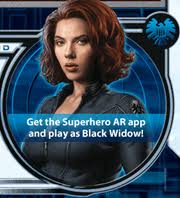 My family and I were among the herds of hero worshippers who hit the multiplex opening weekend to see "The Avengers." To say there was "a bit" of marketing for the film is like saying The Hulk has "a bit" of an anger management problem.

Now, we're the kind of proud geeks who would have seen the movie even if the only promotion had been Irving Forbush handing out fliers on street corners. But the marketing juggernaut behind the Marvel Comics adaptation had put my kids into a fever pitch months in advance—at least once a week after seeing "Captain America" last summer, my six-year-old would ask me when "The Avengers" was coming out.

His enthusiasm—literally at bouncing levels—was heightened by getting a free Lego Avengers poster at the theater. After the movie, which did not disappoint, he immediately begged me to get the Superhero AR/Walmart app he had seen in a commercial during the coming attractions.

While the app itself is decidedly new-school media, the idea behind it is old-school-media 101: Give consumers a strong call to action to do something. In this case, that something was hightailing it to Walmart to scan QR codes to unlock characters in a game (only Hawkeye is playable when you download the app).

For the purposes of motivating our particular clan, it was a success in that it got us into a retail store that we normally don't frequent. And yes, we did do a small amount of shopping while we ran about the store looking for the game posters to scan.

But like the schemes of the super villains our heroes face, the campaign was flawed in its execution.

We could find the posters for all the codes—except Black Widow. I spoke to the manager of the beverage aisle, where the poster was supposed to be displayed near Dr Pepper, and was told that she had never been given any information about the promotion, and had never seen the poster. This is a problem, since players can't get to the final level of the game unless they have all the codes.

Now, it could be that in this campaign Black Widow is just being very stealthy, like the character herself—a master spy. When we went to the Walmart site to print out the picture of her needed for the photo portion of the app, that was AWOL as well. And the next weekend, during a long car trip, we stopped in two other Walmarts to seek the elusive superheroine….to no avail.

As the Avengers themselves show in the movie, teamwork throughout your organization is essential. That means that every facet of your organization—from your website to your retail stores to your marketing team creating the campaign—must communicate and be on the same page to make a promotion a success for the consumer and your bottom line.

And that's your lesson for today, true believers.