Since its early days, the widespread adoption of social media has been associated with teens. But, equating social media with Gen Z is a decision that can be costly to brands. According to Pew Research, the average user on Twitter, Facebook, and Pinterest is middle aged. The Washington Post reports that Twitter saw a 6% drop and Facebook experienced a 38% decline among teens last year as they flocked to newer platforms. 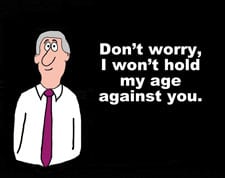 Marketers spend big budgets to reach Millennials and Gen Z, but Boomers are by far the biggest spenders. In fact, Boomers spend close to 50% of all CPG dollars, yet it is estimated that no more than 5% of advertising dollars are targeted at older consumers.

This trend has a silver-haired lining. Boomers—and their dollars—can be effectively reached through social channels on which your brand is already active. Here are seven reasons why older consumers should be a key component of your next social media campaign.

According to Nielsen, by 2020, close to 50% of the U.S. adult population will be 50 and older and they will control 70% of the country’s disposable income. What’s more, they stand to inherit $15 trillion in the next 20 years. While teens and young adults are still planning for the future, Boomers are already wealthy. With an annual disposable income of $2.4 trillion, Baby Boomers also have money to spend. According to the Economic Policy Institute, Boomers and seniors have a net worth 3x greater than that of younger generations, as Boomers’ median household income is 61% greater than pre-Boomers.

Boomers have disposable funds from decades of saving and investing. They account for nearly 50% of all retail sales and outspend other generations by an estimated $400 billion each year on consumer goods and services, according to a U.S. Government Consumer Expenditure Survey. The Bureau of Labor Statistics reports that from 1999 to 2009, the spending by consumers aged 50+ increased a staggering 45%.

The simplicity of modern technology has allowed Boomers to fully utilize social platforms. Don’t forget that Boomers were the first to experience the beginnings of the Internet. Building brand equity among younger consumers is smart but requires a substantial investment and longevity before a return is realized. Using social campaigns to engage those with the access to funds now, allows brands to reap immediate benefits.

From interest to purchase, tweens must go through a two-fold sequence when purchasing a product. According to a report by ad agency Sparks & Honey, Gen Z’s average allowance is $16.90 a week. Thus while tweens may identify a product, to buy it they must consult their parents. Boomers however, are the authority in the household and can make decisions on their own. By appealing to Boomers, brands open the door to an easier sale, they just need to remember to make their content accessible by avoiding confusing wording and fonts that are too gimmicky or distracting.

Boomers as a whole represent the fastest growing demographic among social media users, with about half of all Boomers regularly using social networking sites. For example, since 2008, younger Boomers (ages 46-55) usage on social media grew by 150%, which is more rapid than the growth for any other generation. By 2050, it is estimated that the Baby Boomers population will more than double to 161 million people (Nielsen), making them prime targets for concentrated marketing.

Internet users over the age of 50 are driving social growth as their usage of the social net has nearly doubled to 42% in the past year, according to Nielsen. According to globalwebindex, 70% of online Baby Boomers have a Facebook account. Boomers spend an average of 216 minutes per day on social media. In their use of technology, the youngest Baby Boomers (ages 45-55) are nearly as likely to be online (and to have a home broadband connection) as younger adults.

Boomers are prolific online shoppers. According to Nielsen, a third of them shop online and the 50+ segment spends almost $7 billion in ecommerce. The No. 1 purchase influencer for Boomers is online shopping sites (at 62%) followed closely by advertising, and advice from a sales person, according to a Synchrony Financial report. Forrester Research found that 72% of adults aged 55-to-63 shop online, and Boomers outspend younger adults online 2:1 each year. —Tim McMullen is founder of redpepper. You can reach him @timmcmullen.