Jameson is the leader and primary driver of the Irish whiskey category, with 73% market share. In 2011, Jameson had double-digit revenue growth and a passionate fan base, thanks to a series of tall tales and amazing stories featuring their legendary founder, John Jameson. However, the brand was missing a digital presence and engagement with its fans. Evolution Bureau decided to tap into Jameson's fan base by inviting them to walk in John Jameson's shoes.

For the first time, Jameson fans were allowed to take part in a John Jameson legend of their own. The goal of was to engage Jameson fans online and give them the opportunity to interact with the brand on a deeper level. 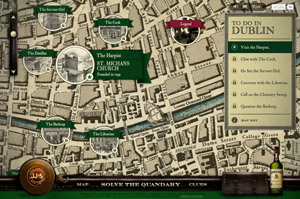 On Jameson1780.com, which launched in November 2011, users logged in through Facebook Connect and navigated the streets of 18th-century Dublin in an effort to track down a mysterious culprit who stole a barrel of John Jameson's whiskey. The only thing they knew for certain was that the culprit was one of their Facebook friends. Users explored 1780 Dublin, interviewed locals, and participated in mini-game challenges to obtain clues with information taken directly from the culprit's Facebook profile.

The site accessed data from the active user profile, as well as from players' friends as allowed by Facebook permissions. The culprit is chosen based on an original algorithm that factors in age eligibility, closeness of connection and available data. Mobile and non-flash users encountered embedded HTML5 video to get the full experience.

Evolution Bureau worked with production company unit9 and director Martin Percy to find the locations, wardrobe and talent for depicting an authentic Dublin 1780 experience. Etchings used in constructing the site were created by artist Steven Noble, who used a scratchboard and transfer process, then scanned the final product to produce digital assets that could be integrated into the site.

Since launch, tens of thousands of players spent an average of four minutes on the site and drove 50% participation among users who passed the age gate, as detailed in this case study wrap-up: