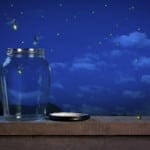 Southern New Jersey was a great place to grow up. Countless memories. One of my favorites was chasing fireflies (aka, lightning bugs) on summer nights. It turns into such a unique game, too. No visibility. A dark sky as a backdrop. No ambient light. And a creature that moves in no discernible way or pattern.

As a child chasing fireflies, your only hope for catching them is that flash of light from the beetle’s abdomen. Flashes of varying lengths and varying durations. A signal. And then it’s gone. As a child with a mason jar in one hand and a punctured lid in the other, you are forced to stop. You stand still. You then expand your scope of vision so you are able to take in the scene in front of you, and more importantly, you are ready to take in the next signal. But you don’t know where that firefly’s signal will come from. Best strategy? Set an anchor for yourself based on where the firefly once was, and then move a step closer to where you think it may be headed. There’s no science to it.

It’s an exhilarating exercise for a child. But it’s a subpar model for converting a client. Unfortunately, fireflies are what marketers deal with every single day.

Think back to that firefly. Every flash of light is an event your customer experiences. Clicking on a banner. Landing on a landing page. Submitting a form. Buying a product. Those are supremely important things. They are transactions with your business. And they truly are energizing moments in your relationship. But they are not everything. They tell you what happened, but they don’t help you understand why and how.

With click and event based signals in front of me right now, I know those signals are there, but I have no understanding of how it got there. I can speculate. And I’ll probably draw a straight line between where it was and where it is, but the truth is: the path to action was probably something more meandering. More beautiful to witness. And more natural to experience. It’s why I’ve always been more fascinated by concepts like “entanglement” marketing or Forrester’s Marketing RADAR versus a traditional funnel based approach to Marketing.

Therein lies the first problem. Marketers are spending too much time standing still while waiting for the next burst of light. They’re too heavily focused on the last interaction they had with their customer and wasting time anticipating the next. They are trying to step back and take in the full landscape but the next flash of light leaves them scrambling.

The second biggest problem is that human beings, when given two points to connect, will more often than not simply draw a straight line between the two. Fireflies don’t fly that way. And people don’t engage with brands that way. If you’re looking for more information on the predictability of fireflies or consumers, I suggest reading Lee Ross and Richard Nesbitt’s “The Person and the Situation” for the “tripod on which social psychology rests.”

Event- and click-based metrics are great for understanding clicks and events. Just like firefly light flashes are great for understanding where a firefly was (or even where it currently is) for a fleeting moment. Event and click-based metrics don’t give you perspective on what a customer did between clicks and events. Just like a firefly’s flight path is difficult to discern when they’ve gone dark.

I raise this analogy as we dive into winter because it’s a last grasp at nostalgia before we say goodbye to fireflies until next year. But I introduce this analogy also to help raise awareness for marketers: event- and click-based metrics don’t tell the whole story. You can now go beyond them.

Logged-in environments offer marketers the ability to fully understand the lifecycle of a customer deterministically. Within a logged-in environment, you have the ID and control what is and isn’t shown. That means you gain full visibility into what the customer is doing. In a world where third-party cookies are becoming less and less valuable, there’s something powerful about a customer logging-in to an environment where they have also logged-in to a conversation on their interests and your capabilities. Logging-in is like following a firefly in full daylight. No guessing required.

Suneet Bhatt is the CMO of LiveIntent.