Taking a winning promotion, in this case an online contest, to a new and even more successful level is what every agency would like to do for its clients. Here’s an example of how Nivea and its digital agency of record, Rosetta, did just that. 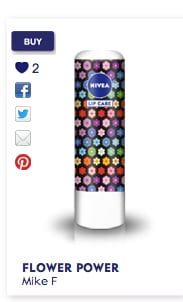 Last year, Nivea ran an online contest, the “Kiss of Style Cap Contest,” letting entrants design caps for its lip care products. More than 10,000 entries were received through Nivea’s Facebook community with the winning design now on sale in stores across the country. Based on feedback these consumers enjoyed the contest but wanted the real thing; they didn’t just want to design a virtual cap, they wanted the cap itself too.

“A big piece of feedback from consumers during the contest was that they wished they could purchase their designed lip balm caps,” Carole Rissman, senior marketing director for Bieresdorf North America, said.

Nivea was excited by these results and grabbed on to the potential to take the promotion to the next level. It asked Rosetta to evolve the program, and in a huge shift, to add an ecommerce piece to create a new revenue stream. It wanted the program to be “always on,” to grow overtime and to create lasting relationships.

A large part of the success of the contest was found in the person who participated: the core target of Nivea lip care, a 25-year old, style conscious young women who thrives on shared experiences and has a status of “Miss Beauty.”

“We realized last year that this experience really resonated with the core audience,” Dave Foster, an account director at Rosetta, said.

This year, the “Style, Uncapped.” promotion recently debuted. A more robust tool developed by Rosetta offers an immersive design and personalization experience and the ecommerce platform. The site has been optimized to be mobile and tablet friendly after seeing a lot of users last year come to play the contest through mobile devices.

The tool allows users to choose from five Nivea moisturizing lip balms and several themes to begin their cap designs—for example geometric, Hollywood or urban. They then choose from 400 different patterns and symbols (200 new symbols this year) to add to the design. As they experiment the cap can be viewed in real time in 3-D and once completed text can be added.

One important addition is the offering of different themes and occasions, like bachelorette parties, wedding, birthdays and anniversary parties, which bring the ecommerce capability to a new level allowing users to purchase caps in bulk (up to 50 caps). The prices vary from $5.99 for one cap and $1 for shipping to volume discounts and free shipping as the quantity goes up. The Nivea lip balm and cap arrive in a “nice little box.”

“Some designs are so intricate that some people may want to buy other people’s designs,” Foster said.

To debut the site to the masses, Nivea and Rosetta partnered with public-relations firm PMK-BNC and fashion designer Rebecca Minkoff, who herself created a limited-edition cap design inspired by her current spring 2013 collection. She featured the cap on her home page for purchase. Three days before the site launched, an event was staged in New York City with Minkoff and well attended by beauty bloggers and editors who tested the design experience and blogged about the event from computers set up on site.

The site is now marketed primarily through social media—page posts on Facebook to Nivea’s more than 1 million fans. A small CRM component will deliver emails to about 300,000 NIVEA customers this week.

“The hope is that it’s shared by Nivea’s most loyal fans,” Foster said. “We’re really relying on the idea of social advocacy to spread the word about the styling caps program to build relationships and acquire new customers into the lip care category.”

News of the site will also continue to be pulsed out through public relations and sampling will continue with bloggers and influencers.

“We will continue to promote the design tool during seasonal moments-in-time, such as holiday and graduation season, when customization and bulk purchase angles are highly relevant,” Rissman said. “We primarily want to promote the breadth and depth of the NIVEA Lip Care portfolio.”