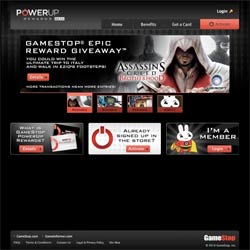 If you’re in the business of inspiring gamers, you’d better be able to think like one. That was the task assigned to The Marketing Arm in Dallas when GameStop decided to replace its antiquated loyalty program with one that lived the life of the avid gamer.

The old program, called Edge Card, had a respectable 3.5 million members and operated as a discount card.

The new program, GameStop PowerUp Rewards, is points-based, churns on monthly epic awards, increases GameStop’s market share, and has the ability to collect customer data to use for customer relationship management programs. The program also resets the focus of the brand directly onto the customer, all with the lofty goal of bringing in 5 million new members.

GameStop PowerUp Rewards was pitched as a way to “Earn Points, Get Cool Stuff!” Members join for free and receive points based on purchases made both instore and online; the points can be redeemed for entertainment-related products found at www.PowerUpRewards.com. The website is the hub of activity, providing all the information a gamer needs to know about the program. 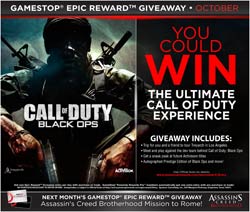 A pilot, which ran in four cities beginning in May 2010, tested and tweaked various member benefits for inclusion in the national rollout, which took place that November at all 4,500 GameStop locations.

The centerpiece to generate both excitement and members was the “Epic Reward Giveaway,” a sweepstakes that remains a mainstay of the program today. It offers one “epic” reward per month that taps into GameStop’s many partners in videogame publishing and entertainment, and “epic” though the rewards are, each is valued at under $10,000. Loyalty members are automatically entered to win when they make an instore purchase.

“We wanted to come up with something that didn’t require members to spend their points,” says Eric Oria, account director at The Marketing Arm. “We wanted prizes that were beyond what most people could afford with their points.”

One giveaway was an all-expense-paid trip to Comic-Con San Diego, provided by Capcom. The winner received full access to the Capcom booth, developer-signed Capcom gear, VIP treatment at a Capcom party, and an opportunity to personally interview the main developers behind legendary games like “Dead Rising” and “Marvel vs. Capcom.” Under another prize package, NASCAR and Joe Gibbs Racing provided behind-the-scenes access to the winner at a NASCAR race in Charlotte, NC. The prize also included a private go-karting session with GameStop #20 car driver Joey Logano.

“We were looking for that wow, holy-crap value,” says Zac Hyman, account supervisor at The Marketing Arm. 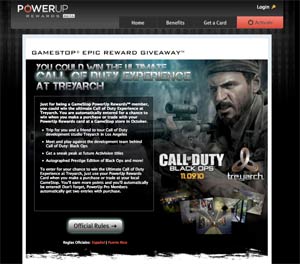 The “Epic Reward Giveaway” was promoted to PowerUp Rewards members through an integrated plan that included a banner and monthly landing page on poweruprewards.com, monthly emails to all PowerUp members, mentions on GameStop’s Facebook page and Twitter feed, a banner at the cash-wrap at all 4,500 GameStop stores, monthly mentions on GameStopTV, GameStop’s instore TV network, and press releases highlighting new Epic Rewards.

In addition to “cool stuff,” members receive gaming news and special-event invitations. And as in the world of gaming, leaderboards count. A tiered membership, PowerUp Rewards Pro adds additional rewards like ongoing discounts on games and a yearly subscription to Game Informer magazine.