The event is part of a much more expansive plan by Celebrity Cruises to put way more funding and effort into reaching—and selling to—consumers face-to-face. This is a new marketing concept for a brand whose mainstay has largely been marketing to customers through direct mail and to travel partners, who in turn sell its cruises to consumers.

The idea is to be out there, mixing it up with affluent consumers who like to travel to show them, through live events, iPad demonstrations, interactive sponsorships, billboards and other marketing what Celebrity cruising is all about and to ink the deal right there and then, if not soon after.

The new marketing plan, called the “Intensification Campaign,” was born of a directive last year from the newly promoted president and chief executive officer, Michael Bayley, to innovate marketing. Executing that plan has been loaded onto the shoulders of sales directors across the country who now also carry the marketing role. Sheri Pasternak is one of those people. She is the director of sales for the Northeast now responsible for face-to-face consumer marketing for three of the 10 cities checked off by Celebrity as key markets: Boston, which kicked off its “Intensification” campaign May 1, New York began activations March 1 and Philadelphia is set to start its program Jan. 1, 2014.

“Marketing was always handled at the corporate level and now marketing is coming to the field,” she said. “It’s the parachute approach. We come into a designated marketing area and saturate the market on a direct level to get more exposure for the brand—to be in face of customers and drive business directly to our travel partners.”

On Celebrity’s Solstice-class ships, the half-acre club on its upper decks is carpeted with real grass, houses The Grill, where passengers can cook their own meals, has eight private cabanas, The Porch breakfast and lunch spot, an art studio, and, yes, a full-time groundskeeper to keep the grass meticulously clipped.

At the Grand Central event, much of this sumptuous space was brought to life through a two-day sale event in June staged by Grand Central Marketing (GCM), Celebrity’s agency of record. A jazz trio was brought in from Lincoln Center, croquet was played and visitors relaxed in the lounge area to nibble on cheese and sip wine. Reps from tourism offices talked about the delightful food and beaches at destinations Celebrity ships travel to like Greece and the British Virgin Islands.

In this new mode of direct selling, mingling with the visitors to the event were Celebrity sales associates dressed in Polo shirts and armed with iPads to explain trips and packages and to sign as many cruise vacations as they could. For GCM, there was a cautious line to be drawn in executing the affair between selling and experiencing the event.

“In having the sales team there pitching the challenge was to find the right balance,” Matthew Glass, chief executive officer at GCM, said. “As people walked in we didn’t hit them up with a hard sell. The experience promoted the sale through signage and material and the occasional announcement.”

Much of the creative and messaging tied to the word “grand.” The event was held at Grand Central Terminal promoted under the title, the “Grand Sales Event.” Offers were made for  $1,000 (a grand) savings on a cruise to Europe or a half-grand savings on other cruises. The two-day event increased bookings by 47%, Pasternak said. 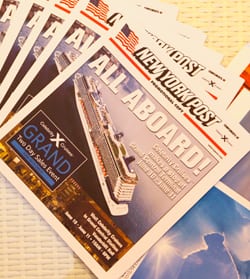 Out on the 42nd Street entrance to Grand Central Terminal, brand reps handed out New York Post newspapers with a cover wrap that explained the two-day sale and mentioned the event inside.

“We don’t have the funding to be all over TV,” Pasternak said. “We identified events and markets where we’re segmenting and targeting the consumer that we’re looking for. We’re a premium brand, looking for the affluent traveler and we’ve identified 1,300 zip codes where we are really going right after that market and by doing so getting involved in events that cater to that market.

Also around the New York metropolitan area, Celebrity Cruises is participating in both small and large events.

It sponsored the “Midsummer Night Swing” series in Damrosch Park, part of Lincoln Center for the Performing Arts, which ended July 13.  There, it hosted the “Modern Luxury Lounge” over the span of the series as people danced alfresco to swing, salsa, tango and soca bands. All season and six-dance pass buyers received access to the lounge where they could have a drink and enter a sweepstakes to win a free cruise. The six concerts were expected to draw between 200,00 and 250,000 people.

It brought its chefs to the James Beard Foundation’s “Chefs & Champagne Event” in the popular seaside resort of the Hamptons on New York’s Long Island where they prepared a line of food served on board the cruise line’s ships.

“The budgets have quadrupled to provide a saturation in the market,” Pasternak said. “We can now be a player in some of the key events that we never really were able to. We really have been exposed to a lot of publicity.”

The next major undertaking is Celebrity Cruises’ sponsorship of the PGA Tour tournament, The Barclays, to be held Aug. 22 to Aug. 25 in Jersey City, NJ. An activation tent will be constructed by GCM with many of the same elements from the Grand Central Terminal Lawn Club event. There, it will be selling two golf-themed getaway cruises, one in Bermuda and one in the Caribbean, where it has inked partnerships with golf courses and coaches.

And in October, Celebrity is an official sponsor of the Food Network New York City Wine & Food Festival.

Supporting the major events and sponsorships are billboard ads and posters in train stations, content on social media, as well as joint promotions with local travel agents.

“Many of these things Celebrity has never done before,” Pasternak said. “We’re now in conversation with one of the bigger sports teams in New York to become their official cruise line. We’re just kind of pounding the pavement here.”