Airbnb has 60 million travelers and 1 million hosts. During the first week of August 1 million people stayed in Airbnb’s in a single night; that equates to the tenth largest city in the U.S. It operates in 34,000 cities in 191 countries.

Those stats are impressive. Just as impressive is Airbnb’s lofty goal to be a SuperBrand alongside the likes of Starbucks, Apple and Nike. To do that, “we had to create our own playbook,” Jonathan Mildenhall, Airbnb’s chief marketing officer said today at the ANA Masters of Marketing Conference. “We’ve studied those brands, they have an instantly recognizable mark, credibility and, increasingly, their communities do some of the work.”

The approach has five core tenants that marketing strategy is built on.

Surprisingly, Airbnb has a skimpy 1% spontaneous awareness across the globe and just 18% in the U.S.

“The first thing I have to do is make people aware of the Airbnb brand,” Mildenhall said. “The strategy is the power of human hospitality to open up the mindset of the world to open your mind and open your door for everyone to feel as if they truly belong anywhere.”

To do that Mildenhall wants to become the first community-driven super brand, largely by doing things that have never been done before.

On New Year’s Eve it launched a community-driven, social experiment. It donated $1 million to its host community: a $10 credit to each of 100,000 hosts. The hosts were asked to go into the world and do some random act of hospitality, take a picture and post it using the #OneLessStranger hashtag. The social and PR value was huge.

“The thing I was most proud of was how many in our community actually engaged,” he said. “The overall social media engagement was 98% and I’ve never seen that level of engagement before. 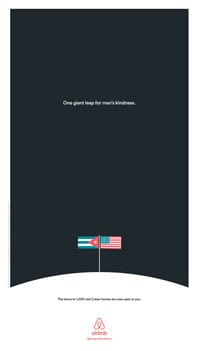 In another example, exactly 76 days after President Obama made the announcement that sanctions were easing in Cuba, Mildenhall said Airbnb was the first American company to set up there. It ran an ad in major media outlets like Newsweek and Time. The ad played off man’s first walk on the moon. It read, ”One Giant Leap for Man’s Kindness.” with images of the U.S. and Cuban flags.

The effect was swift. Hosts, everyday people and others took photos of the ads and posted them on social. Major media outlets picked up the story and blasted it out.

“The social content that the team created didn’t go viral, but the ads did,” he said. “Just goes to show you that you can’t predict everything. Our entry into Cuba became the biggest PR story in Airbnb’s history.”

Mildenhall and his team have an enemy to fight too: strangers, or what he calls “the uncomfortable truth.” It’s a reality that guests may worry about traveling around the world on their own staying with strangers.

“As a marketer it’s important to lean in to the uncomfortable truth; why stay with strangers. To put it front and center of the advertising gives us an authenticity,” he said. “We over index on things like adventurous, surprising and unique, yet the travel industry is built on credentials like trust and safety. We deliberately cast a single white female traveling around the world alone,” he said.

Reviews for guests and hosts also “create a wonderful sense of transparency and trust,” said Mildenhall, who spent seven years at Coca-Cola before being recruited by Airbnb.

Another initiative is to create wonder. As an example, Airbnb gave people the chance to win a sleepover of their dreams through partnerships with other brands. Last month, IKEA in Sydney, Australia, offered a one-night only sleepover at its store. That caught the attention of KLM, who converted a jet into an Airbnb listing. And, not to be outdone, the stylish resort of Courchevel, France, dressed a cable ski car, 9,000 feet up in the air, for an Airbnb guest and Boston put on a Night at Home of the Boston Red Sox.

“This has become such a great way of generating huge and significant conversation about the properties you might find on the platform,” Mildenhall said.

“The most significant thing that a 21st century brand must do is stand for something. Specifically, Millennials are seeking out brands with their same values. We need to do marketing that matters and pushes the human race forward,” he said.

Airbnb leaned into Caitlyn Jenner’s onstage acceptance of an award for her bravery by pulling together a 60-second spot, “Is Mankind?” in just two weeks. It ran just after she accepted the award.

“We knew it was an opportunity for us to promote our own position on human values,” he said. Watch the video.

Caitlyn hand penned a letter to Mildenhall and Airbnb’s founder to “commend you on the beautiful spot.”

This kind of advertising “allows us to transcend the travel industry and stand apart,” Mildenhall said. “No one is telling the stories we are. At Airbnb there is this sense of fearlessness,” he said. “The company has nothing to lose. That means we use innovation to grow our marketplace each and every day. In traditional companies it’s the fear of losing what you have. You put artificial constraints on because you’re desperately holding on to what you have. Try and experiment without fear. Fear and conservative thinking is the one thing that is holding back a lot of traditional organizations.”