In the past, many marketers turned to their agencies for creative. Now, says Tim Washer, many corporate marketers are being asked to write and produce content. “When people are doing that for the first time, that’s a whole new challenge for folks and a whole new level of fear comes into play.”

Washer is a veteran comedy writer and performer for shows such as Saturday Night Live and Last Week Tonight with John Oliver, and a content producer for brands such as Cisco, IBM and FedEx. Another big gig was delivering the opening keynote for Connect to Convert, where he shared ideas on how to tell better stories and ways to create an environment that encourages creativity and taking chances.

In improv, says Washer, actors and comedians get used to taking risks, because they’re working in a supportive environment. People are free to say anything.

“It’s incredible to see [an improv show] come together,” he says. “I don’t think many people live their lives that way, but improvisers do. They’re able to perform and see the amazing things that came come from moving forward with the belief that you can’t mess up and it’s impossible to fail.”

In the “real” world, people tend to not behave like this because of a key difference: There are financial consequences

“Many of us feel if they try a new idea that doesn’t work, they might get fired, or a promotion might go away, or it might affect their bonus,” Washer says.

How can you encourage people to take risks? For one thing, change the corporate culture and get people to believe they have freedom to take changes. “Let’s have some sandbox work—if we do something and it doesn’t work, let’s celebrate the process.”

“The most important thing is to be more creative, and be aware of things that can halt creativity,” he says. “Working in a cubicle isn’t going to make you creative. Neither is a large committee.”

Storytelling can feel like a bit of a risk for some marketers who feel pressured by the c-suite to talk about the product, rather than create a narrative.

“You need to create something more emotionally engaging, rather than just talking about the product,” says Washer. “At Cisco, I never like to mention the customer name. I’d rather talk about the customer and what they did—it creates a better story.” 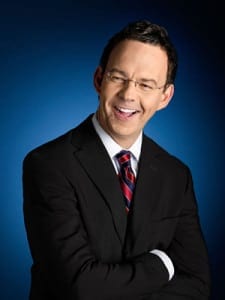 The fundamentals of storytelling are basically the same in B2B and B2C, he says. “You’re looking for some type of protagonist, which could be your customer, and some type of obstacle they needed to overcome. Get people engaged and interested in one particular person or character. Focus on a specific point—the more specific you are, the more universal it will be.”

Washer notes that when he first started doing stand-up, he would write out stories that happened to him. “Then I’d try to generalize it, and I realized I was going in the wrong direction, because I thought people couldn’t relate to specifics.”

Rather, the opposite is true. “Don’t say ‘retailer’—say ‘flower shop.’ The truth is in the details, and it becomes real when you talk specifically about the details. People try to make things ‘global,’ but what does that mean? You can’t get seven billion people come to a consensus. Once you take the details out, the story falls apart.”

Humor is another way to make a story come to life. “The wonderful thing about humor is that it lets a brand show that they’re comfortable with themselves and they can be self deprecating,” says Washer, noting that helps people to warm up to companies. “And, it also shows that you won’t always be selling to them. It creates a human connection that starts to build trust and loyalty.”