A week or so ago, Mondelez International, the maker of iconic Nabisco brands like Oreo, Ritz and Honey Maid, and Mondelez brands Trident and Stride, dropped a national FSI to 48 million households kicking off what will be its largest integrated sponsorship marketing campaign. The main event is its title sponsorship of the English-Irish pop boy band, One Direction, and its American summer tour and millions of  swooning, screaming young fans. 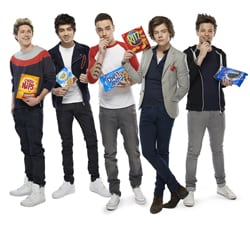 While the overall size of the program is unique for Mondelez, the focus will settle on specific touch points to drive retail sales. For example, 20 million packages feature One Direction graphics and promotions. Walgreens dedicated 8,000 end caps for one month and floor graphics line the aisles in 15,000 stores, including Walmart and Target. As a sponsor, there will be on-tour sampling, wrapped buses and paid media on Google and other online media sites. Integrated into it all is a sweepstakes offering coveted tickets to concerts throughout the summer.

“This isn’t about slapping on a logo, shaking hands and saying we’ll see you along the way,” Stephen Chriss, senior director, U.S. media and consumer engagement and marketing services at Mondelez, said.  “It’s about putting our brands in consumer conversations about what is relevant today to help us break through shopping when it really matters—at point of purchase at store.”

Every Mondelez retail customer is activating against the sponsorship in unique ways, including Walmart, Kroger and Target. At Walmart, customers who buy products and download the code get the ability to upload a code to get a One Direction playlist from Spotify. At Target those who use the code receive a One Direction notebook.

The individual brands are also activating differently in their own channels. Ritz will run an online sweepstakes offering autographed One Direction t-shirts. Oreo is leveraging its 33 million Facebook fans with unique content, as well as posting and tweeting about the happenings. Nabisco, Chips Ahoy! Honey Maid, Trident and Stride are also in the game. One Direction itself will also be posting and tweeting to its millions of social media followers and fans.

To understand the impact of the multiple marketing components, a “robust” measurement team is in place to measure both hard numbers—sales—and soft—clicks, time spent on site, downloads, etc. Much of the monitoring and measurement takes place in real time throughout the eight weeks of the program providing the opportunity to quickly pivot to optimize the executions. Mondelez, a global snacking powerhouse, with 2012 revenue of $35 billion, is also working with Nielsen to measure the lift in sales “because at the end of the day that’s what this is all about,” Chriss said. 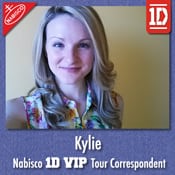 A blogger, Kylie (left) chosen through an online contest, has been named the “Nabisco Tour 1D VIP Correspondent,” and will be on the road with One Direction, which begins the 35-city tour June 13 in Miami and wraps Aug. 10 in Los Angeles. The hired correspondent’s salary and experience will include exclusive tour access, $40,000 and other perks. Several hundred entries were received, a result Chriss is pleased with.

“We were quite pleased,” he said. “There is a hurdle here. You have to prove you have the capability to go on road, to report out and create a video about why you should be the VIP correspondent.”

On a local level, a public-relations outreach will promote free tickets to the concerts. Gofencing advertising will remind those close to concert sites about the events. At the events themselves there will be signage, interactive text-to-win videos for seat upgrades and exit sampling.

Some 90% of the budget—seven figures—for this program is going against “how to win in store,” he said.

“You won’t see TV or print, the majority of the focus is online,” Chriss said. “The largest part of spend is focused on in store—POS to packaging to in-store media to shopper marketing—that’s where I need to win.

A robust social media, which began in December to start building buzz and anticipation, and mobile program is in place to reach the to 13- to 17-year-old target audience and their moms.

A mobile app is a hub for news and information about the One Direction band members and other content. The more the user engages with the app the more content is unlocked. In stores, app users can scan packages to unlock augmented reality messages from the boys.

“We’ve made augmented reality a cornerstone to bring the packages to life,” he said. “The idea is to reach the sweet spot, 13 to 17-year olds who will tell their moms to ‘get me another package so I can get more content. Kids are going to want more and moms are going to want to buy.”

The One Direction partnership, in development for about one year, is on par with Mondelez’s two-prong strategy to pair with “evergreen” type properties and to tie to what is culturally “hot,” he said. Mondelez is also the official cookie cracker of NASCAR and the NCAA.