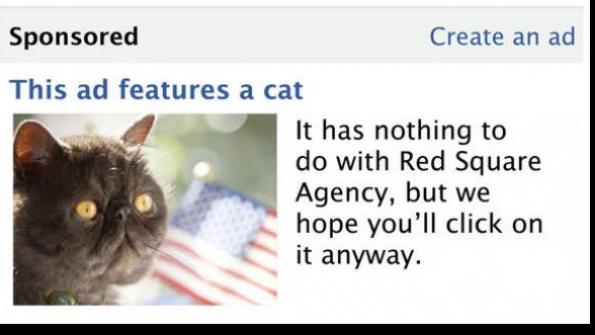 When Red Square Agency decided to run ads on Facebook, they tested a few concepts. Some were well-crafted and traditional. Others weren't. One ad featured a photo of an employee's cat with this ridiculous headline: "This ad features a cat."

The result? The cat outperformed the other ads by 39%.

With a story like this, you might be tempted to finally give up on the ad world. Those fools would be better off, you might think, to stop pretending there's still a science, an art, a reason to labor over word choice or go without sleep before a big campaign.

But that would be a huge mistake. A better response is to assume the cat worked for a reason, a reason you can find with a bit of digging. With some clever thinking, you could even turn that explanation into some guidelines for creating your own success story.

Let's pause for a second to consider two things. First, Facebook is a social platform. By definition, its main purpose is to connect people, to let them have exchanges with others. Second, brands know this about Facebook, but somehow they completely forget it as soon as they decide to run ads there. Instead, they revert to their broadcast mentality—sending a one-way message the way they would on TV or in a magazine—and it flops because no one cares.

Red Square's cat ad had nothing to do with their agency, but it had everything to do with what Facebook users want, which is to be left damned alone by advertisers. Or at least, they don't want advertisers to act like they're advertising. They want brands who will be—shocking—social.

Do you see the implicit rules at work? To be successful on Facebook, smart brands are laying down their broadcast mindsets and talking to users like real people. And when they do, they're handsomely rewarded.

The Way of the Buffalo

Buffalo Wild Wings is a surprising brand to have over five million fans on Facebook, but they've earned each one of them (with the help of Atlanta-based 22Squared) by listening to what customers love about the restaurant and then serving it up online.

One of their strongest practices is what they call the "art of un-copywriting." In other words, they talk to their fans like friends instead of customers. Rather than saying, "Today's a great day to try some delicious wings from Buffalo Wild Wings," they just say, "Mmmmmmmm wings." And then they watch as it earns 3,000+ likes and 400+ comments.

Again, the secret isn't to throw out the rules, the craft, the time. When BWW became intentional with their Facebook page, they didn't create a marketing strategy. They built a conversation strategy, and they kept tweaking it as they watched what worked best with their fans—word count, post frequency, text vs. picture, etc. And part of that strategy, not surprisingly, is to talk about the brand itself no more than once every five posts.

By now, you're probably wondering how any of this is going to make you money. And if you've made it to this question, you're farther along than most companies ever get. They just see other brands building massive Like counts and decide they should have a pile of Likes for themselves. So they create a campaign, or pay an agency to do it for them, and the only reason they have for all their nonsense is that, well, they need Likes, don't they?

But what are they going to do with that crowd once it's gathered? Do they have the money it costs to keep everyone entertained?

More than wanting to buy your product, the crowd you gather on Facebook wants to keep interacting with you. They're wanting to be social. And if you don't give them that, you'll eventually lose them.

In other words, Facebook probably won't immediately make you money. And if you don't accept that before you start, you'll bail before you ever see what could come out of it. Then, you'll truly have lost – money and time, and for no fruit.

So what's the fruit? How about a living, breathing brand that people connect with on deeper levels than mere usage? How about a love and loyalty in your customers that you've never known, because they feel your value for them as actual people and not just revenue streams?

And with a crowd of loyal customers like that, you can end up making more money than you could ever have imagined. But to get there, it takes a lot of socializing, listening to your customers, finding creative ways to engage them, and maybe throwing in a cat or two of your own.

Tim McMullen is co-founder and lead strategist at redpepper.